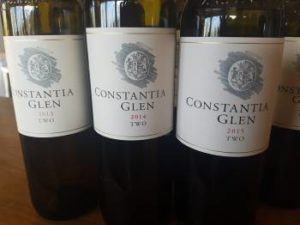 Not your average “dry white”.

Last week, Constantia Glen winemaker Justin van Wyk presented a vertical tasting of the 2013 through 2015 vintages of his Sauv-Sem blend reminding those in attendance just what a fabulous wine this is. The 2013 rated 4½ Stars in the 2014 RisCura White Hot Wine Awards 2014 (before the switch to the 100-point quality scale), the 2014 93 points in 2015 and the 2014 89 points this year but as with Magna Carta 2015, its counterpart from nearby Steenberg, is way off its best (see more on the Magna Carta here).

The current-release 2015 sells for R220 a bottle while the 2013 as sold at the recent Nedeburg Auction went for an average price of R1 635, equivalent to R272.50 a bottle. The 2013 still has many years ahead of it and the price fetched on auction must be seen as relatively modest. It is however in line with the overall trend which see SA fine red wine generally selling for a far higher premium than white. To illustrate this point, consider that at the Nederburg Auction, dry red sold for an average of R670.50 per 750ml bottle and dry white R332.25.

Justin van Wyk started as assistant winemaker at Constantia Glen in 2008 before taking over full responsibility in 2011 and to celebrate a decade of his tenure at this property,...