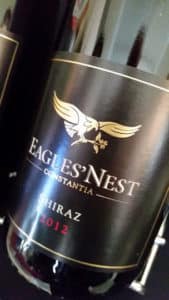 Stuart Botha, winemaker at Eagles’ Nest in Constantia, says his Shiraz 2012 is the best wine he’s ever made and given his fine track record with the variety, his comment does heighten expectations just a little.

Because of Eagles’ Nest’s location in relatively maritime Constantia, you might be inclined to expect the Shiraz to be something light and understated but actually the wine is always quite big and sleek and the 2012 is no exception. Matured for 16 months in French oak, 50% new, it has an alcohol of 14.5%.

The nose shows red and black, plenty of pepper and spice and an elusive fynbos top note. There’s great intensity of flavour on the palate – super concentration, fresh acidity and firm but fine tannins before an extraordinarily long finish. The extraction has been handled really well – there’s shape and form here to go with all that pure, deep fruit.

Tasting the wine, I was on the verge of calling it “damn sexy” but decided that sells it short and opted instead for “statuesque” and while it is most striking, I’m not sure it represents a huge advance on the possibly more lithe 2011. In any event, this remains one of South Africa’s foremost examples of the variety. Wine Cellar price: R250 a bottle. Score: 94/100.

Whereas Eagles’ Nest used to buy in grapes from Durbanville and Darling to make its Sauvignon Blanc, the 2021 vintage is W.O. Constantia with the result that the property now...

SA Wine History: What were the best wines after Constantia?

SA Wine History: Napoleon’s favourite Cape wine – and did it kill him?

‘Napoleon really didn’t enjoy himself on St Helena but [the Constantia wine] helped a bit,’ said Lisa Honan, Her Excellency the Governor of Saint Helena, Ascension and Tristan da Cunha,...