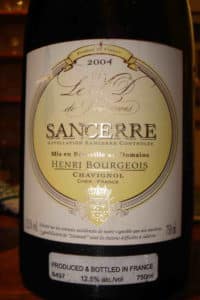 As a family, we’ve found over the years that a very sensible way to count down the hours before midnight on New Year’s Eve is to match the best the cellar has to offer with a multi-course meal.

This time around Gosset Grande Reserve from magnum with the canapés consisting of ceviche of kingklip, green humus (made with garden peas instead of chickpeas) and Parmesan and almond biscuits; Henri Bourgeois Le MD de Bourgeois Sancerre 2004 with asparagus in Hollandaise sauce to follow; and then a flight of reds consisting of Cordoba Crescendo 1997, Chateau La Fleur-Pétrus 1998 and Beyerskloof 1999 with rack of lamb, potato bake and Mediterranean-style grilled vegetables. There was a bottle of Tokaji lined up to go with the frozen berries in white chocolate sauce but let’s just say that the company assembled had had elegant sufficiency by this stage.

The trio of reds were meant to be the highlight of the evening but were upstaged by the Henri Bourgeois Le MD de Bourgeois Sancerre 2004. The Cabernet Franc-driven Crescendo from the now non-operational Helderberg property was quite frankly a huge disappointment, appearing thin and tired. The Merlot-driven La Fleur-Pétrus from Pomerol and the Cabernet Sauvignon-driven Beyerskloof from Stellenbosch were both very good but then these are wines that come with high reputations.

By contrast, the Henri Bourgeois was a revelation. This is, of course, one of the most important houses in Sancerre and it is well known for the quality of its Sauvignon Blanc (Le MD de Bourgeois being one of its better bottlings from vineyards some 40 years in age near the hamlet of Chavignol) but how much to expect from Sauvignon, which even its most ardent supporters have to concede is not one of the noble varieties?

The 2004 was just fantastic, having good palate weight and showing lots of ripe tropical fruit but not at all overblown, soft but sufficient acidity lending balance – a style often emulated in South Africa but rarely achieved.

How did it work with the food? There are those that consider pairing Sauvignon with asparagus as unsophisticated, the wine too similar to the vegetable in flavour profile to reveal anything interesting but it’s a combination I like. In this instance, however, the food was secondary next to an utterly delicious wine. One of those bottles you wished wouldn’t come to an end.

Those who’ve only been around the Cape wine industry for a few years might not even have heard the name of Quoin Rock (and maybe never will – but I’ll...

Some older Stellenbosch reds over the weekend consisting of the 1993 and 1995 Cabernet Sauvignon Merlot from Grangehurst and the Cabernet Franc Merlot 1998 as made by Chris Keet under...

Yesterday the announcement that Kayetan Meissner, sommelier at Bosman’s Restaurant at the Grande Roche Hotel in Paarl had won the third annual Bollinger Exceptional Wine Services Award, the other two...