Those who’ve only been around the Cape wine industry for a few years might not even have heard the name of Quoin Rock (and maybe never will – but I’ll come to that later). The name, though, acquired a good resonance in the first dozen years of the millennium, for wines coming off both the home farm on Stellenbosch’s Simonsberg slopes and its associated property in Aghulhas.

It had all started off well, with Kiwi winemaker Rod Easthope and Michael Fridjhon as consultants. But from the outset there was a whiff of associated scandal, given that Quoin Rock was owned by businessman Dave King (or was it his dog?), embroiled in a huge tussle with SARS: the two properties were eventually liquidated, and King was declared “a glib and shameless liar” by the High Court, while SARS got a lot of back-tax.

Controversy didn’t end, however. Wendy Appelbaum (owner of DeMorgenzon) put in a winning bid of R55 million at the auction of the Stellenbosch estate in 2011 – but it emerged that the auctioneer had engaged a “ghost bidder”. Quoin Rock went on the market again and was sold for R85 million to yet another billionnaire, but this time a Ukranian, Vitaly Gayduk.

Since when, nothing very much, not many releases since 2012. Quoin Rock winemaker for much of the decade, Carl van der Merwe, had left (for DeMorgenzon) in 2010, no doubt frustrated by SARS’s strict and conservative financial control as its battle with King continued. Carl’s assistant, Narina Cloete, took over – but that appointment was to end (accompanied by some public mutterings about unfairness). Meanwhile, the Gayduk purchase led quickly to the broken dams being repaired and viticulturist Nico Walters appointed to restore the neglected vineyards. 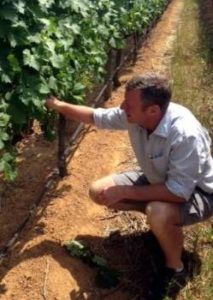 Chris Keet became consultant winemaker. Chris first acquired a reputation at Cordoba, till that label disappeared and the farm was put on the market (there is at last a new owner there now); now he helped to find new winemaker: the shortlist required a person who was, among other things, young, and without an own-label wine. Then, says Chris, came “the curve-ball”, as the owners suddenly pushed him to take the position himself – though not only was he happily set up with a number of winemaking and viticultural consultancies, but he’s also not entirely young any more (though not the “old fart” he calls himself), plus he has his own label – First Verse, a highly regarded Bordeaux-style red blend.

He eventually accepted, and has been ensconced a year in the splendid and spacious facilities of Quoin Rock, working closely with Nico in the vineyards; he’s wound down nearly all of his consultancies – but kept on First Verse with the approval of his new boss. He’s finding the job “stimulating and challenging”, he says, pleased that the Gayduks “have set the bar very high” in terms of ambition. (The owner’s son, Dennis Gayduk is the MD of the farm, and acts as interpreter between Chris and the non-English-speaking Vitaly)

So when can we expect some wines from the new regime, and what? Well, says Chris, after a great deal of thinking and discussing, they’ve decided to focus on just one wine, a cabernet-based one, launching with the 2015 vintage – its name yet to be decided, but definitely not Quoin Rock. (Other wines off the two properties are sold off to an American-owned company.) It might even include shiraz, and if, say, petit verdot and malbec are wanted for the blend, they will be bought in – clearly it’s not a requirement for this to be a single-origin wine.

Furthermore, those who remember the moderate, cab franc-based Crescendo that Chris made for Cordoba, and who note that First Verse is also a fairly restrained wine, hovering between classic and modern-New-Word, will be surprised to learn that at least some of the components on the new Gayduk wine were picked with a lot over 15% potential alcohol: Chris says the 2015 vintage had a long-lingering “neutral” phase, meaning that the ripeness he sought was long-delayed. It won’t be a blockbuster, however, and certainly not packed with new oak. The must went through a reverse osmosis machine to reduce the alcohol – and might go through it again. Those components do taste pretty good, I must say, and I look forward with interest to the release of the maiden blend in a year or two. One thing is certain, it will be as ambitiously priced as it is ambitiously conceived.

Meanwhile, I gather that good old Dave King still has a vast amount of money (and a new business in Johannesburg), and recently bought the largest single shareholding in Rangers Football Club, where his role is, unsurprisingly, hugely controversial. Better such stuff in Glasgow than Stellenbosch, I say.