Many commentators argue that South African top-end wines sell at a discount relative to their international counterparts and a fascinating process is currently under way as producers attempt to discover precisely what  price the market will bear – the launch of the. Cabernet Franc 2014 at R15 000 per three-bottle case a recent case in point. 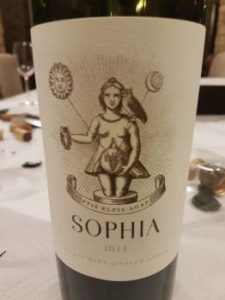 Now Gary and Kathy Jordan of Stellenbosch property Jordan have played their hand. Previously, Cobblers Hill was the Stellenbosch property’s generally available top-end Bordeaux-style red while Sophia, also Bordeaux-style, was reserved for sale at the Cape Winemakers Guild Auction. This is no longer the case, however, with Sophia, or at least a version thereof, becoming a standard release, the maiden vintage 2013 currently available at R1 350 a bottle (Cobblers Hill 2014 selling for R380 a bottle).

Turns out that a CWG version of Sophia will continue to be made but how different will this be from the standard production wine? Speaking  to this, Jordan winemaker Sjaak Nelson insists that there are small but significant differences between the two wines.

The standard-release Sophia 2013, meanwhile, was served at the property’s 25th anniversary celebration held last night and very good it is, too. A blend of 50% Cabernet Sauvignon, 38% Merlot and 12% Cabernet Franc, it spent 24 months in French and American oak. The nose shows red and black berries, fresh herbs, some floral perfume, earth and oak spice. The palate is rich but balanced with dense fruit, fresh acidity and firm but fine tannins. Exceptional care has evidently been taken in its assemblage and it’s a real pleasure to drink. Without immediately recalling my score for the CWG version, I again settled on a score of 94/100…

Chef Marthinus Ferreira, of dw eleven - 13 in Johannesburg, has been selected as head chef of The Jordan Restaurant in Stellenbosch from mid-April 2022. The signature restaurant will trade...

The Chenin Blanc from Jordan in Stellenbosch is named after Louis Albert Péringuey, the 19th Century Inspector-General of Vineyards in the Cape, who led the fight against phylloxera and supervised...

Tim James: What Have the Supermarkets to offer Serious Wine Lovers?

The top end of Cape wine – and the upper-middle range - gets increasingly costly (no judgement here – just saying!). The bottom shelf of bottled stuff is, on the...