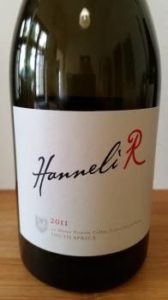 Hanneli R is the flagship red blend from Franschhoek cellar La Motte and with it only made in exceptional years, the volume kept small and the price tag high means it’s a wine which demands to be taken seriously.

It’s probably the best resolved to date. Red and black berries, an olivaceous quality, spice and dried herbs are all very enticing but there are also a definite vanilla note, too. On the palate, there’s great intensity but also intricacy – the Petite Sirah and Tempranillo add intrigue. The wine has freshness and the grapes were obviously not worked too hard. There’s an inescapable veneer of oak, however, the wine appearing quite drying on the finish and you have to wonder if that 40 months was entirely necessary.

That said, I increasingly accept the argument that not posting reviews of “lesser” wines leaves users of this site with no means of calibrating. What, for instance, would I make...

I’ve never quite known what to make of the top-of-the-range red blend called Hanneli R from La Motte and the current-release 2013 is no exception (price: R1 300 a bottle). Consisting...

While Syrah-Viognier blends are not nearly as fashionable as they were perhaps 10 years ago, one producer which persists is La Motte in Franschhoek and the result always a stylish...