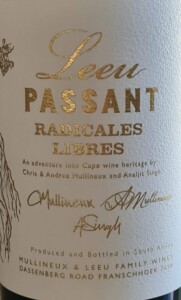 The Radicales Libres Chardonnay from Andrea Mullineux under the Leeu Passant label is, in a word, unorthodox. Grapes from the Tradouw Highlands outside Barrydale in the Klein Karoo, the wine is handled oxidatively throughout the winemaking process, maturation in barrel lasting five years. “Anything that can happen to it, has happened to it,” says Mullineux. Barrels are racked once a year and are kept topped with themselves so the style is closer to traditional Rioja white than Jura – a natural concentration takes place but no real flor develops.

I recall being slightly non-plussed by the maiden 2014 vintage (as sold at the 2019 CWG Auction) and then very much taken with the 2015 (as sold at the 2020 CWG Auction). The 2016 vintage, in turn, grew on me rather than being instantly appealing. The nose shows citrus plus subtle nutty, earthy, yeasty notes as well as a touch of flinty reduction. Great depth of flavour on the palate as you might expect while in terms of structure, there is plenty of weight and texture but also snappy acidity, the finish long and saline. Available as part of a three-pack that also includes the 2014 and 2015 vintages, selling for R2 295 – read more here.

While Andrea and Chris Mullineux are exclusively Swartland focused when it comes to the wines labeled under their surname, Leeu Passant allows them to explore the rest of the Cape...