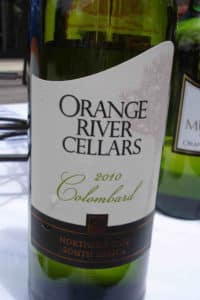 The problem with South African wine writing is that nobody’s prepared to make really big calls. A bunch of my colleagues went up to Upington for the Orange River Winemaker of the Year Competition recently but I’m buggered if any of them came back with recommendations about wines we should actually seek out and buy.

Consult the 2011 Wine magazine Best Value Wine Guide sponsored by Ultra Liquors which features wines selling for no more than R60 a bottle, and you’ll discover that Orange River Cellars shares the title of best value cellar overall along with Distell. Seen much coverage of that? No, me neither.

At the Wine magazine Best Value Wine Show at the swish Vineyard Hotel in Newlands, Cape Town held yesterday, I had chance to re-taste the Orange River Cellars Colombard 2010 (cellar price R21.20). When I experienced it blind while judging for the Best Value Competition, I rated it 14.5 on the 20-point scale and described it as having “grapey” aromas and flavours, round and full in structure with soft but sufficient acidity. It ended up with an overall quality rating of 2½ Stars and a value rating of 20 out of 20.

There’s absolutely nothing romantic about winemaking in the Northern Cape (flood irrigation to keep the semi-desert vineyards alive) but it’s not uneconomical.  After more than one sample portion of the Colombard consumed sighted while trying not to fall into the pool at the Vineyard, I still think it’s more than acceptable and urge you to buy it if you’re looking for a quaffing white to drink in large quantities over the next six months.