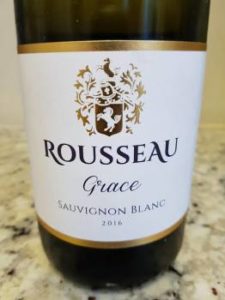 Former Constantia Uitsig viticulturist and winemaker André Rousseau now makes some wine under his own label and has just released Grace Sauvignon Blanc 2016 named after his mother and selling for R105 a bottle.

70% of grapes are from Durbaville, 24% from Noordhoek and 6% from Grabouw, this latter portion being barrel fermented.  On the nose, a hint of flintiness before cucumber and fresh herbs through grapefruit and granadilla. The palate is juicy and full, not too aggressively acidic yet the finish is still long and pithy. Nicely assembled and should make for very good summertime drinking.

André Rousseau, formerly of Constantia Uitsig, now makes wine under his own label, the Grace Sauvignon Blanc 2017 just released and comprising 47% of grapes from Darling, 47% from Durbanvile...