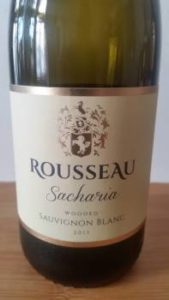 It’s no secret that after Pieter Erasmus, CEO of retail group Pepkor, acquired Constantia Uitsig at the end of 2013, he undertook a clean sweep including a complete staff overhaul.

Former viticulturist and winemaker André Rousseau managed to buy some of the property’s Sauvignon Blanc from the 2015 harvest on his way out and set about making a wine under his own label at Steenberg.

Called Sacharia after a female predecessor, his family descendant from the French Huguenots of the 17th Century, the wine underwent spontaneous fermentation and was matured for seven months in two second-fill, 600-litre French oak barrels. Price: R190 a bottle.

It has an elusive nose of pear and white peach and the palate is similarly subtle and understated – broad with moderate acidity and well integrated oak. Turns out that the wine has a RS of 7.5g/l (spontaneous ferments often don’t finish completely dry) and this is no doubt contributing to a thick textured character. It’s very well assembled if a bit lacking in excitement right now but most likely will be more happily resolved in 12 months’ time.

And either way, it was Frederick and Christina’s son Nicolaas Russouw (Jacob Rosendael’s great-grandson, one of 12 children) who inherited Steenberg in 1765, around the time a ‘holbol’ gable was...

Elunda Basson is the new winemaker at Steenberg Vineyards, the Graham Beck Enterprises-owned property in Constantia. Basson, who succeeds JD Pretorius after his move to Warwick in Stellenbosch, takes up...