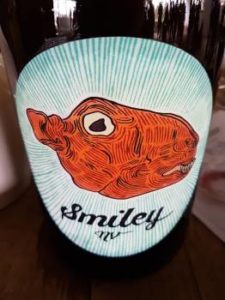 While the first incarnation of Smiley White Non-vintage was, um, a little obscure, the second is much better realised (price: R135 a bottle). It’s from Swartland Chenin Blanc and includes components drawn from the 2013, 2014, 2015 and 2016 vintages. “White Jura was a reference point,” says winemaker Ryan Mostert. “Some of the wine was intentionally maderised, some made with flor, some with skin contact.”

It makes for remarkable drinking. Citrus, green apple and peach are in evidence but also notes of sea spray, nuts and spice. The acidity, meanwhile, is really zippy and the finish pithy, almost salty. Tons of interest and a wonderful lightness of being. Top stuff.