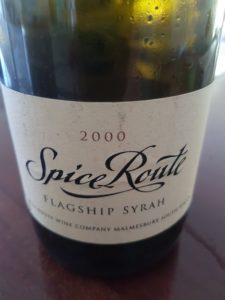 Further down the line.

The Flagship Syrah 2000 from Spice Route is notable in that it was made by Eben Sadie in the same year as he put together the maiden vintage of his Syrah-driven Columella.

It rated Four and a Half Stars in the 2003 edition of Platter’s, taster Angela Lloyd writing of it: “Antithesis of many new-genre SA shirazes: all silky subtlety, seamless fluid lines, unmanipulated feel. Not a show-stopper, but reveals great savoury length, rich-textured grip. 2000 if broached now, will benefit from decanting; better to leave till 04-05; should peak much further down the line. 13.6% alc, 16 months French oak.”

A bottle I gave my sister at around the time of release was opened this past festive season. The nose showed red and black fruit, olive and spice but also intriguing notes of meat broth, earth and undergrowth by virtue of age. The palate meanwhile was marked by a great core of fruit, bright acidity and grippy tannins. Still “rich textured” as Lloyd originally discerned. Sadie gets eulogized all the time but wines like this suggest it’s all deserved.

Whereas the current-vintage Columella 2017 from Swartland producer Sadie Family Wines consists of Syrah, Mourvèdre, Grenache, Carignan, Cinsault and Tinta Barocca that was matured for 12 months in barrels (8%...

Tim James wrote recently about the new Obscura range from Spice Route, the wines made in large terracotta vessels known as qvevri imported from Georgia, spurring me to undertake my...