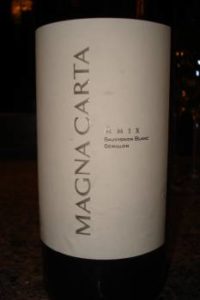 Last night the launch of Magna Carta 2009, the flagship offering from Constantia winery Steenberg, this being the second ever release after the 2007 vintage, the 2008 not producing wine of sufficient quality to bear Magna Carta designation.

The 2009 is a blend of 60% Sauvingon Blanc and 40% Semillon, the latter component fermented in new French oak barrels (a combination of 225-litre and 500-litre in size) and left on the lees for a further three weeks before  being blended with the Sauvignon Blanc and returned to tank for 90 days. “Longer lees contact than that and the wine can become rancid,” says cellarmaster John Loubser.

What’s remarkable about the 2009 is that 30% of the Sauvignon Blanc is from a Durbanville vineyard. It thus becomes a multi-regional wine rather than property-specific , no doubt disappointing all those who hold the notion of terroir dear. Loubser and winemaker JD Pretorius are adamant however that the portion of Durbanville fruit is essential to achieve the complexity that they desire.

Some will buy because of the critical acclaim it’s sure to receive (it already has a 5-Star rating in Platter’s 2011), others will buy because of its prestige pricing (at R440 a bottle it is South Africa’s most expensive white wine) and rarity (total production: 3 400 bottles).  Make no mistake, however, the wine is intrinsically excellent. As for how it is showing at the moment, the nose billows from the glass, showing all sorts of aromas (blossom, fynbos, lime and tangerine) while the palate has weight and texture offset by scintillating acidity. Also in its favour is that it appears neither excessively oxidative nor reductive, winemaking technique applied sensitively and astutely. In terms of analysis, meanwhile,  this is text-book stuff (abv 13.5%, RS 2.2g/l, TA 8.1g/l, pH 3.2) and on that basis should drink well over the next 10 years at least.

What’s particularly fascinating about this wine is the one variety in tension with the other, especially as they evolve so differently. I can assure you that the 2007 is in great nick: I had it at the recent Constantia Fresh Friday night dinner where it was served next to two top examples of Grave, Smith-Haut-Lafite Blanc 2005 and Domaine de Chevalier Blanc 2005, where it more than held its own.

After all the drama and intrigue of the Catharina Ustings story, is Steenberg’s next chapter a bit of an anti-climax? Far from it, in my opinion. Again, let’s start with what...