After all the drama and intrigue of the Catharina Ustings story, is Steenberg’s next chapter a bit of an anti-climax? Far from it, in my opinion.

Again, let’s start with what the estate claims on its website: ‘In 1695 Frederik Russouw de Wit bought the farm… Russouw was a powerful and wealthy member of the Burger Council and it was he who built the new U-shaped house in 1695. He also made the first wines…’

The Resolutions show that the Russouw who bought Steenberg in 1695 had fallen on hard times due to poor health (‘siecktte en debiliteit’). The inventory taken after his death in February 1699 lists a quantity of building materials (bougereetschap), suggesting that he may have intended to improve the dwelling on the property, but this task now fell to his widow.

And who was his widow? Drumroll, please. She was none other than Johanna Rosendael, the daughter of Jacob Cornelisz van Rosendael, the man officially recognized as the Cape’s leading winemaker in the 1660s and 1670s!

To recap: he’s the man who bought Jan van Riebeeck’s farm Bosheuvel in 1665 and was soon making ‘lovely’ (lieffelyke) wine. In 1670, after being praised by the officials for ‘showing great diligence in extending his vineyard’, he was granted the unprecedented privilege of selling his wine privately, in large as well as small quantities.

When I introduced Rosendael to you in this article, all I knew was that he had died prematurely, sometime before 19 July 1676, which is when his widow married Tobias Marquart. Well, I’ve now found official notice of his sudden death on 23 April 1676, when the Journal recorded that he had been ‘snatched away from this sinful, perishable and vain world by the cold, unexpected, relentless death’. He was buried the following day: ‘God grant him and us all, when parting from this world, a blessed resurrection.’

(Does remembering him nearly 350 years later count as a resurrection of sorts?)

Previously I hadn’t been able to establish what happened to Rosendael’s three children, so to have his eldest daughter appear out of the blue at Steenberg in the 1690s is profoundly satisfying. (I’ve since also established that his other daughter, Cornelia, married a man named Frederik Meyer. Although she ended up in Calcutta, where she died in 1729, her daughter at the Cape, Catharina Elizabeth Meyer, had two sons with a man named Amos Lambrechts – another family tree worth ‘climbing’ at some stage.)

For now, here’s what we know about the second mistress of Steenberg:

Johanna ‘Jannitje’ Rosendael was baptised on 22 March 1668, and she married Frederick Russouw de Wit on 16 June 1686 – the same year her mother and stepfather left the Cape under a cloud (Marquart had been reported to the authorities for beating a slave to death). Johanna’s husband was German, perhaps from Russow in Mecklenburg-Vorpommern, northern Germany. He signed his name as Friederich Russow and he was an alcohol pachter from 1688 until 1696. Their son, named Frederick, was baptised on 11 May 1687, which means he was not quite 12 years old when his father died in February 1699.

On 25 October 1699, Johanna married Nicolaas Oortmans (from Amsterdam) who doubled the size of Steenberg through two additional land grants (which incidentally made him responsible for maintaining the Steenberg mountain pass we know as Ou Kaapse Weg). Johanna died in 1713, and in 1717 Oortmans transferred the property to her 30-year-old son, Frederick.

It was this Frederick Russouw, Jacob Rosendael’s grandson, who was the ‘powerful and wealthy’ burgher councillor. The Opgaafrol shows that by 1725 he owned 47 slaves (including seven females and eight children). A decade later, however, his widow Christina Diemer owned 66 slaves and had 30,000 vines planted. Even more significantly, she never remarried, thereby becoming another formidable female owner of Steenberg in her own right.

In fact, Christina Diemer/Russouw prospered beyond all expectation after the VOC decreed in 1741 that Simons Bay should become its winter port. Not only did she supply ships with fresh produce but she also offered overnight accommodation at her farm – her bounty and hospitality so impressing VOC ‘commissioner extraordinaire’ Baron Gustav van Imhoff that he granted her an additional farm near Slangkop ridge (in time duly known as Imhoff’s Gift, the land then incorporating Ocean’s View and Kommetjie) on condition that she increase production for the VOC even further.

All things considered, I suspect that it was the Widow Russouw, rather than Russouw himself, who oversaw the building of Steenberg’s circa-1740, U-shaped homestead. 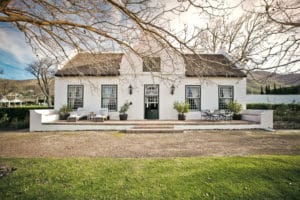 The Steenberg homestead with its circa-1765 holbol gable, the date of 1682 (obscured by branches) probably indicating when the original dwelling was built.

And either way, it was Frederick and Christina’s son Nicolaas Russouw (Jacob Rosendael’s great-grandson, one of 12 children) who inherited Steenberg in 1765, around the time a ‘holbol’ gable was added to the front of the original homestead (the only one of its kind in the Cape Peninsula, predating the fancier baroque-influenced gables at Groot Constantia by nearly 30 years).

In 1801, Daniel Russouw (Jacob Rosendael’s great-great-grandson, one of 11 children and, incidentally, the brother-in-law of Lambertus Colyn of Hoop op Constantia) became Steenberg’s next owner. He, in turn, had 13 children but in 1843 arranged for the property to be transferred to two sons-in-law, Frederik Anthon Olthoff (who was married to Elizabeth Debora Russouw) and Johannes Adriaan Louw (who was married to Leonora Russouw).

Louw was a fifth-generation descendant of Jan Pietersz Louw, one of Rosendael’s ‘very good, industrious, hard-working’ Liesbeeck contemporaries, and Steenberg would stay in his family (a big one, given that Leonora Russouw gave birth to 13 children) right up until 1990.

Which means that the blood of the Cape’s first highly regarded winemaker, Jacob Cornelisz van Rosendael, has flowed through the veins of his Russouw and Louw (and Lambrechts?) descendants for three and a half centuries, on farms that include what is now one of the Cape’s prestige estates (owned by Graham Beck Enterprises) and goodness knows how many others, considering how many children were born in each generation.

I’d love to find out how many people currently working in the industry can trace their lineage back to him… A show of hands, please?