“Innovation and diversity” are apparently what the line-up of the upcoming Nedbank Cape Winemakers Guild Auction signifies but I beg to differ. Chardonnay from Jordan, Cabernet Sauvignon from Le Riche, Merlot and Shiraz from Schultz of Hartenberg and Pinotage from both Truter of Beryerskloof and Beeslaar of Kanonkop is about as safe as you could possibly get and there are a number of other more or less predictable offerings. Most Guild members style something to appeal to an end-clientele which is moneyed but conservative in their wine tastes and the auction is about cashing in. Nothing wrong with making a buck but please don’t pretend otherwise.

There are a few exceptions, however. Genuinely brave wines include the the Muscat de Frontignan as well as the Roussanne-Grenache Blanc blend from Badenhorst, the Semillon Gris from Mullineux, the Viognier blend from Trafford, the Cab-Cinsaut blend from Ellis, the Portuguese red blend from Nel and the Cinsaut-Grenache-Syrah blend from Savage.

And then there’s the Barbera 2013 made from grapes grown on Bruce Jack’s Oveberg farm called The Drift. The auction bottling goes by the name of “Die Kans Vate” and I wasn’t quite sure what to make of it at the official auction preview tasting – 56 wines in three hours is no mean task. 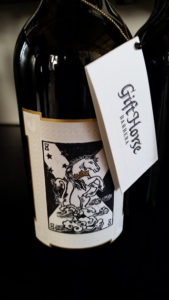 Happily, however, I recently got to re-look the standard bottling called The Gift Horse and would advise that those looking for something different should seek this wine out.

What’s the appeal of Barbera for Jack? “It’s the rustic, peasant grape of north-west Italy. Like Monastrell in Spain and Pinotage here, it’s normally very difficult make decent wine out of it but when you put love and attention into the vineyard, it responds beautifully,” he says.

The nose shows red and black berries, a little vanilla and a pronounced herbaceous quality while it’s pure and concentrated on the palate with quite high but not searing acidity and nicely grippy tannins. It easily held its own against a Marengo Barbera d’Alba Pugnane 2012 but it’s not cheap at R750 a bottle from the farm. Jack, however, apparently only made about 50 cases…