Stellenbosch has finally woken up to the fact that having a signature variety is no bad thing when it comes to putting across a compelling marketing message and is now billing itself as the “Kingdom of Cabernet”, the launch of the campaign marked by tasting featuring 20 prominent examples during Cape Wine in September. 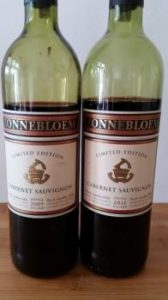 Zonnebloem is getting behind the initiative and provided samples of two vintages of its Limited Release bottling, the 2009 (as shown at the Cape Wine event) and the 2011.
Grapes come mainly from two areas, these being Jonkershoek and Stellenbosch Kloof but also Devon Valley and the Helderberg. Maturation in both cases lasted 14 months in new French oak.

More red fruit than black, a vague note of mint plus oak-derived vanilla, chocolate and spice. Medium bodied with fresh acidity and fine tannins. Respectable but no great shakes.

Black fruit, a hint of violets and vanilla. Good concentration with soft but sufficient acidity and well integrated oak – less angular than 2009. Appears quite youthful so keep at least until 2018.

A matter of wider interest emerged from my piece about the worrying state of the Stellenbosch Wine of Origin structure, prompted by a Dutch sommelier’s excellent dissertation on the subject....

Dutch sommelier Arjen Pleij, a deeply knowledgeable and frequent visitor to the Cape (his restaurant has a remarkably large list of South African wines), scratched his head over Papegaaiberg and...

As published in the January 2017 issue of Decanter: Stellenbosch has the wine, the people and the natural beauty to rival any wine tourism region on earth. If the district...