Anna Trapido: Eating our way out of extinction 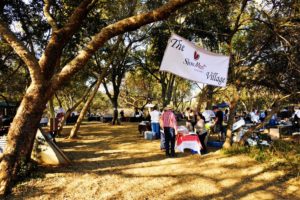 Nose to tail at the Slow Meat Village. Image by Malcolm Drummond.

Meat eating can be extremely destructive. The Take Extinction Off Your Plate campaign has expressed concern that global meat consumption is accelerating deforestation, drought, and other environmental crises. They argue that the livestock industry has driven many wild animals into extinction and that it is also responsible for more greenhouse gas emissions than cars, trains and airplanes combined.

Of course there is merit in such an argument but there are also situations in which eating (and encouraging the farming of) an animal is the best way to save its bacon. There are numerous examples of currently endangered animals that were once fairly commonplace in South African kitchens. As tastes, shopping, cooking and farming practices change, once plentiful beasts become essentially extinct in the marketplace and then literally extinct everywhere. According to the UN Food and Agriculture Organization, over the last decade at least one livestock breed has vanished every month around the world.

Eating to prevent extinction seemed like a fun way to spend a Saturday so I joined a carnivorous band of over 200 farmers, butchers, chefs and eaters from Slow Meat SA on Saturday 16 May, at Le Sel @ the Cradle restaurant in the Cradle of Humanity to cook an Afrikaner cow (supplied by Cloete Afrikaner, outside Vryburg) from nose to tail. Twenty top chefs participated in the process so whether diners fancied Pinotage-braised short rib with chilli gremolata (made by Sun City Executive Chef Nicolas Froneman) or a ginger-steamed suet pudding (from Adrian Vigus Brown of the Melrose Arch Hotel) there was something to suit every palate and wallet.

The magnificent beast was aged and portioned by Caroline McCann of Braeside Butchery, Parkhurst, Johannesburg who explained that “this native South African breed (with impressive spreading horns and a characteristic hump at the back of its neck) is descended from cattle that arrived in Africa over 2000 years ago and gradually made their way into South Africa, evolving along the way, with their traditional owners.”

According to McCann, South Africa’s East Coast is Nguni country but the west coast and interior were traditionally grazed by huge herds of ancestral Afrikaner animals. Breeding programmes have slightly modified certain traits since the 17th century but the basic bovine remains much the same. The Afrikaner’s long association with Africa has resulted in adaptation to local climatic and parasitic conditions. The short-haired, tough skin is tick resistant. They have twice as many sweat pores as European breeds of cattle. Early European settlers quickly abandoned the exotic breeds that they came with in favour of the hardy beasts that they found at the Cape.

Despite their proudly South African adaptations, Slow Meat SA activists are now concerned that the breed is in danger of disappearing. Where once there were plentiful herds, it is estimated that there are now less than 20,000 head of cattle left. The extent of their decline in numbers becomes clear when one considers that at least 30 000 draught oxen pulling 3 000 ox wagons and a further 170 000 herded cattle crossed out of the Cape and into the Orange Free State, Natal and the Transvaal with the Voortrekkers during the Great Trek of 1835-36. In so doing Afrikaner cattle blended and bonded into the identity of Afrikaner people. Asking an Afrikaner farmer in Vryberg about his hump-backed cows engenders a response every bit as emotional as asking a Zulu farmer about his Nguni cattle in KZN.

The decline has been a long time coming. A combination of the 1897 Rinderpest epidemic and the British Scorched Earth policy during the South African War decimated Afrikaner cattle numbers. When herds were restocked, scarcity resulted in the additions coming from exotic international breeds. More recently, industrial farming has exacerbated the problem. As Chef Arnold Tanzer from Food on the Move pointed out “South African farmers increasingly work with commercialized breeds, which produce lean meat in a shorter period of time and can be sold to feedlots. Nationwide, meat is graded (and priced) against this feedlot-produced beef as a standard. Afrikaner cattle are valued at less money per kilogram. Furthermore they are slower growing and have a higher percentage of fat when slaughtered at a similar age. Because they are raised on open pastures, their meat is darker red and their fat is yellower than ‘industry standard’ beef. “

Consumers may no longer be used to the meat’s appearance but they really should look again. The beast has a strong genetic leaning towards meat tenderness and beat out all other breeds (both indigenous and exotic) in 2013 taste and texture tests coordinated by the SA Agricultural Research Council. The meat is exceptionally juicy and has a robust flavour that is distinct from modern mainstream breeds. These flavours may not make it to the top of supermarket buyer lists but they are appreciated by foodies seeking novelty and quality.

The great taste and texture was evident in each bite at the Slow Meat SA event. Every ounce of animal was consumed. Host Coco Reinarhz made a magnificent sirloin steak sandwich on sourdough bread with pickles. Arnold Tanzer simmered up a beautiful broth (with bobbing sue mei beef dumplings) from the hoof. Chef Klaus Beckmann of La Luna in Melville made steak tartare and braised lampredotto (tripe with sauce verge) while Chef Adele Stiehler-van der Westhuizen (principle of the Prue Leith Chefs Academy) delighted customers with sous vide chuck steak on cauliflower puree with roasted onions and a spekboom jus. Phil de Villiers from 54 on Bath served oxtail with gnocchi and sage butter sauce. The chefs cooked everything but the moo and it all tasted proudly South African. Future events are planned for other provinces.