All things considered, the best advice I can offer is don’t visit Cape Point. I say this because I recently braved the trip and it left me wondering why I had. Be prepared to survey the ocean in the company of armies of Japanese samurais armed with their selfie sticks – but it is not for me. Ready yourself for the banal conversations of passing tourists – one British couple walking down from the lighthouse seemed more concerned with the ‘shite wi-fi’ than the enormity of the vista of Cape Point. The tour guides it seemed have become intent on robbing the place of its former false claim-to-fame of being the place where the ‘two oceans meet’ (I suspect that many of these guides now have more lucrative tours to the southern tip of Africa that is Cape Agulhas which defines the official geographic divide between the Atlantic and Indian Ocean).

there are way better ways to spend a day out …

If all that is not enough to dissuade you, consider this: the last time I visited for a picnic I was mugged by a baboon and lost half a bottle of Springfield Wild Yeast Chardonnay in rescuing my kid from the troop (in retrospect I should have saved the vino). Nope, to my mind, there are way better ways to spend a day out …

Take Cape Point Vineyards as an example. Geographically these are the closest vineyards to the point – although, in reality, they’re really not all that close to the Point at all (metaphysically they’re actually in another galaxy). Cape Point Vineyards is situated on the slopes above Noordhoek close to the spectacular Chapmans Peak Drive (and this really is something you should drive on your travels around the winelands. No question it is one of the great drives anywhere in the world).

Most importantly, Cape Point Vineyards its far enough away from the actual Point so there is no need to worry about tour bus traffic nor the samurai selfie brigade. It is unhurried and offers a peaceful view of the ocean across the vineyards. There is good food and wine – including picnics on the lawns above the farm dam complete with superb views out over Noordhoek towards the blue waters of the Atlantic. And I have it on good authority that no picnickers get mugged by anyone or should that be anything….

Eat drink and be merry at Cape Point Vineyards

The estate is known for its white wines – predominantly Sauvignon Blanc as well as the excellent Sauv-Sem blend known as Isliedh (top performer in the recent Aerobotics Sauv-Sem Blend & Wooded Sauvignon Blanc Report) but I can forgive them this – I am a Chardonnay man – if that’s not an oxymoron – and their Chardonnay is also yum.

The estate is known for its white wines

In addition, there’s an easy-drinking white and red under the Splattered Toad label – proceeds from the sale of these help raise awareness of the plight of endangered Western Leopard Toads that occur in the surrounding wetlands. 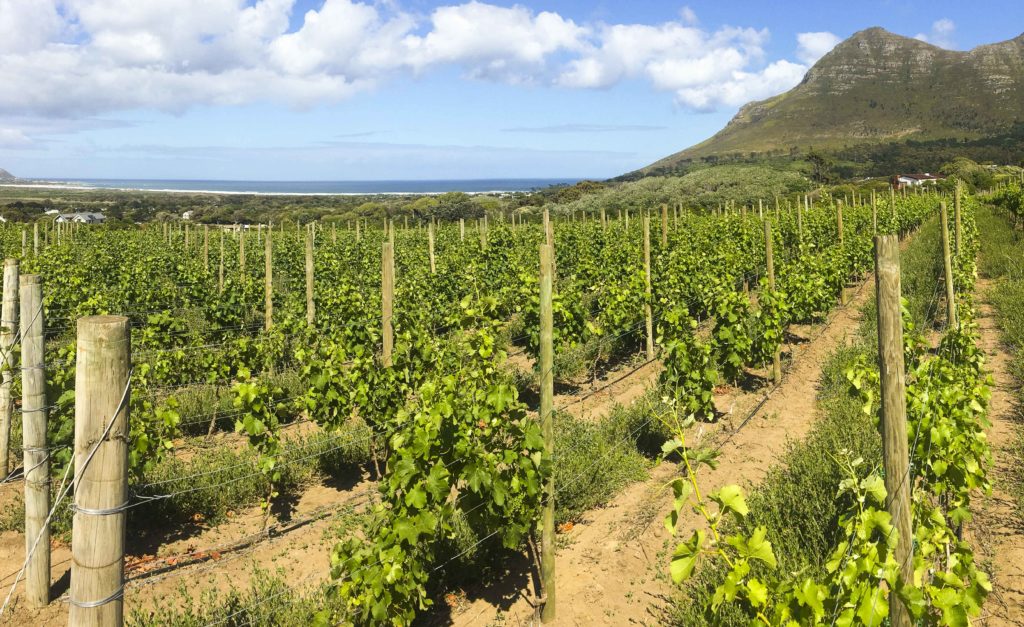 The vines of Cape Point Vineyards are cooled by salty sea breezes off the Atlantic Ocean.

Lastly, the restaurant is superb but you should realize that its geared more to proper lunches rather than the drop-in-for-a-toasted-chicken-mayo type snack. For snacks, it’s best to opt for a picnic hamper (widely regarded as one of the best vineyard picnic experiences in the Winelands). Picnics do however need to be booked 24 hours in advance…