It just so happens that I’m a member of Generation Y, a product of the 80s, a Millennial, and isn’t everyone curious to know what we’re drinking and why.

Clever marketing definitely is a factor. For example, it’s no secret that a large number of my social circle will select a wine from the shelf because it has an attractive label. There are some darn savvy sales & marketing teams out there whose job it is to lure the consumer to pick Bottle A over Bottle B when doing grocery shopping or hanging out at a favourite restaurant.

It’s all about standing out from the crowd. Take last year’s RMB WineX as a case in point. Anybody attending would’ve noticed the attractive team of girls in figure-hugging, scarlet dresses promoting their brand. Was that stand bustling over the three nights? Absolutely.

Many out there are equally swayed, if not more so, by awards. I eventually lost count on the night of the 2015 Veritas Awards as to the number of medals that KWV, Nederburg and Spier took home. Although you will find some serious and noteworthy wines made by these producers, many also make less extraordinary wines to appeal to a younger generation of drinkers. After all, these youngsters partaking in quaffable wines now are the ones who will go on to explore and experiment with more of the range later on as their tastes change and evolve. This is the art of catch and keep and I’m sure it works well enough. 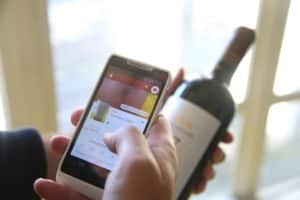 Marketing aside, however, what I think makes Millennials different is that we’re engaged with products like no generation before. Smart phone in hand, we can compliment, criticize and share thoughts on a particular wine via a plethora of downloaded apps. You can ‘tag’ the wine farm you’re sitting on, the winemaker and even his dog (guilty as charged). Scan a small black and white square on the back label and have everything you want to know about that wine delivered to your phone in moments. Or, snap a pic of the bottle and your mates sharing in the joy it brings and send this out to the world via Facebook, Twitter and Instagram.

And lest we forget, a hashtag is no longer #justahashtag. You can exchange thoughts on Chardonnay with friend, foe or a stranger who is sitting in Napa; you may even have holiday plans together by the end of it. If you could go back in time and explain this scene, a Baby Boomer would say there is something dodgy in the wine you’re drinking.

Because of the Millennials incessant search for the next cool thing, we are seeing a shift away from traditional. There are now a number of younger generation winemakers who have defied the conventional in the winemaking process (even the varieties used) and breathed fresh life into the industry, with some spectacular results. There’s everything from white Pinotage and rooibos-wooded wines, to Méthode Ancestrale and orange wines to tickle the tastebuds.

Wine festivals are where wine brands can interact with their clientele and where it’s hip to be seen as a younger wine drinker. Get dressed up to the nines for the L’Ormarins Queen Plate, lounge on the lawn at Constantia Fresh, don your beret for Franschhoek’s Bastille Day celebration or have your taste sensations seduced at Big Bottle. Are we here to upend the wine establishment? Not at all. Wine is about enjoyment. Same as it ever was. We merely want to enjoy it on our own terms.

Daisy Knowles: Some thoughts on Merlot’s place in the market

Merlot’s popularity among consumers is well documented. And yet it is so often regarded as sub-standard by critics. Merlot has been seen as the whipping boy in the world of...

Daisy Knowles: The importance of setting when it comes to drinking pleasure

To summarise three or four of your most memorable wine experiences when you are, shall we say, a regular partaker, is really quite tricky indeed. When not earning my bread...

As we slide into February, recovering from the wave of prediction posts that decorate blogs and websites through January like tinsel decorates Christmas trees, most of us are nonetheless still...