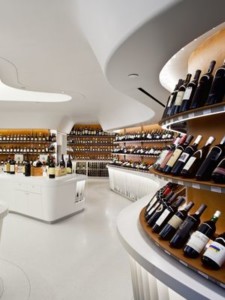 After several weeks in the United States this summer, one of the more pertinent things I noticed in the wine retail environment was the diversity of quality product offerings at multiple price points. The American business community just seems to ‘do retail’ so professionally and with such an incredible level of enticement. Where local US (mostly Californian) brands were not necessarily available, they were seamlessly substituted with a diverse array of international alternatives. But essentially, almost every price and style offering was catered for from $10 dollar whites and reds all the way up to $100+ premium brands. Something for everyone, products for every depth of pocket.

Much of this stands in stark contrast to the US proposition that used to be encountered in the UK market in the late 2000s. Essentially, the product offering suffered from the “donut effect” with a multitude of very average quality entry level mass market brands flooding the supermarkets from the big corporate winemaking conglomerates and then… nothing. Well certainly nothing after about £7 (R130) per bottle until you reached the “indie merchant” echelons of £25+ (R465) bottles, where of course the sky was the limit. Before I became much better acquainted with the overall US offering, I would spend an age wondering where the middle ground had disappeared to. In fact, the middle ground did indeed exist and was flourishing, just not in the UK market. These high-quality, well packaged and presented brands were being reserved for sweet spot pricing in the US home market. It is only when you looked at the retail shelves in the US itself that you realised how many brands never left local shores.

This was a serious problem regularly identified by the UK trade buyers and became a rallying point to which the generic promotional bodies eventually directed a lot of effort and resources to address as it was highlighted as a clear point holding back the broader market development and success of the US wine category in the UK. Almost a decade later and Wines of California now regularly presents multiple trade tastings which are segmented into offerings of “Wines Under £20 Retail” or “Premium Wines Over £50 retail” etc. The result of this targeted pricing strategy has been to broaden the appeal of the US wine category to all levels of consumers. In so many ways, when I look at South African wine category offerings in the UK, I can’t help but to feel a certain sense of deja-vu with the growing chasm between the entry level offerings and the burgeoning premium categories.

All fast-moving consumer goods (FMCG) marketeers will regularly harp on about the need to have clear uninterrupted ladder pricing in order to allow consumers to trade up. But in essence there is so much more to it than simple economics of budget size. Wine is such an emotional product that draws on so many more purchasing cues than normal manufactured consumables. Consumers take ownership of a brand, they assimilate it into their lifestyles and engage on so many more levels with the product… from region to winery, from individual terroirs to specific winemaker personalities. They incorporate what they drink into their greater personal identity. It’s not simply about whether you are a Coke or Pepsi kind of guy.

Having these complex cues and multiple levels of engagement are certainly one of the great added value elements of the wine category. Diversity and complexity of message is celebrated as a strength, not a weakness. So South African producers should pay far more attention to the diversity of pricing levels within their offerings. Clearly, the temptation to go super niche and focus solely on higher margin premium quality offerings is very great and with the notion of modern consumers perhaps drinking less but better, this direction of marketing and segmenting may well seem the correct way to go for many wineries. But as so many of even the top premium Bordeaux Chateau have discovered, you need to have more affordable and accessible everyday products to introduce consumers to your brand. For many, the only viable route has been to introduce second and even third wines into their portfolios. But within a South African context, our producers still have the economic viability and flexibility of multiple brand ranges that tap into the consumers broader willingness to engage and offer loyalty.

I have certainly always championed the notion of celebrating home-grown market success before taking on the complexities of international challenges. But let’s make sure as an industry, we don’t sleepwalk into the trap of the “donut effect” that could certainly disrupt South Africa’s ongoing success and growth in mainstream export markets like the UK, the USA and Europe. Let’s make all our very best products at all price points available to thirsty and supportive international consumers.