I know it’s only September, but the way the year has been progressing so far, I suspect one would be hard-pressed to find anyone who wouldn’t agree to 2020 being surreptitiously terminated prematurely by way of a hard reboot. Just holding your finger down on the power button until the lights go out, count to five, and press restart with the year hopefully resuming with normal operations while simultaneously killing off the suspected virus that was making everything go haywire. Well, there is no harm in dreaming…

One thing that hasn’t been a dream is the fabulous weather we’ve enjoyed this year as we experienced one of the driest and sunniest summers on record here in the UK with temperatures still hitting the early to mid-20s centigrade even as we approach the middle of September, which is as anyone who has lived in the UK will know, one of the most uplifting factors as we all subconsciously start to assume the automatic seasonal brace position in preparation for another dark, cold, depressing winter.

Talking about the weather is, of course, a national pastime in the UK and so you will hopefully forgive my sentimentality as I look back on a lost year that could have been so incredibly magical and exhilarating, filled with memorable summer parties and fine wine-fuelled social gatherings were it not for the small matter of a global viral pandemic. But as a South African living in London, my home from home, I will still remember the lockdown months of 2020 with a certain strange fondness, sitting on my sunny deck in the back garden with a glass of delicious Rosé in hand wondering if 11.45am was too early for the first glass of wine of the day! But of course, just as discussing the weather has long been a favoured cultural pastime in the UK, in the wine trade, the same can be said for the annual autumnal crystal ball gazing and prediction generating competition amongst wine trade commentators, who all seemed to believe at one point in time that it was absolutely de rigeur to dedicate one of your final columns of the year to making ridiculous pronouncements and predictions about the year ahead.

Then, all of a sudden, and I can’t for the life of me remember the year, but I certainly remember the moment, leading blogger and wine journalist Dr Jamie Goode wrote a sensationally cutting article calling time on this ridiculously vacuous practice. Perhaps it was just the waste of wine column inches that were being dedicated to pointless and repetitive fantasizing or just the mere fact that no one ever seemed to get any of the predictions even vaguely correct, that led to his animated literary outburst. Who knows? The net result was that the practice somehow seemed to disappear almost overnight with commissioning editors taking flight and never again daring to propose that their columnists write up their “top ten predictions for next year.” 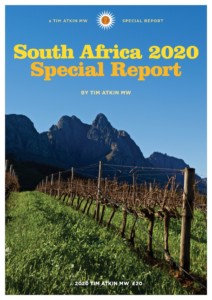 Now I know what you are thinking… and no, you are wrong. I am not going to be tempted into resurrecting what I too believe is a completely mindless and pointless exercise of crystal ball gazing, trying to predict future wine trends. But rather, what actually reminded me of the hilarious prediction merry-go-round era was this past week’s frothing social media and rumour mongering surrounding not only the impending results of the highly respected Decanter World Wine Awards but also the pronouncements from one Tim Atkin MW in his 2020 South Africa Wine Report. Completed this year almost solely with samples couriered by South African producers to Tim in the UK, many have hypothesized how tasting all South Africa’s greatest wines away from the cellars of production and outside of the winelands would possibly impact on the resulting scores? Would there be any more hundred pointers? Would he dare? Or might he even consider more than one this time? Yes, entertaining banter for sure if you are a wine geek.

WhatsApp and twitter this past week have started to resemble the pre-Oscars nominations night with every fine wine collector committing their two cents worth to predict which wines would feature in the lauded 98 to 100 point arena. Needless to say, the nominations from the wine connoisseur chattering classes have included all the usual suspects. So with only a day to go until the announcement of Tim’s red and white Wines of the Year 2020 are live-streamed on Instagram, I thought it would be fun to regurgitate just some of the candidates and wines consumers themselves feel are worthy of greatness.

To be fair, while 2019 is an exceptional year for taut, mineral, tension driven white wines with great purity, it is perhaps slightly farfetched to anticipate many 99 or 100 pointers being awarded to any new 2019 release whites. Then again I may, of course, be wrong, with notable and very worthy candidates including wines from the likes of Eden Sadie and his Old Vine Series whites, Chris Alheit’s single-vineyard Chenin Blancs or even one or other single-vineyard Chenin Blanc white from David and Nadia Sadie. These for me are the long-odds runners where anything is possible. Where things really start getting interesting is with some of South Africa’s top reds and without doubt, top favourites with short odds include the Kanonkop Paul Sauer, the Mullineux Iron and Schist single terroir Syrahs, the Porseleinberg Syrah, Reenen Borman’s Boschkloof Epilogue Syrah as well as the Rall Ava Syrah. But then, of course, there are also the silent pedigree runners like the Delaire-Graff Reserve Cabernet Sauvignon or even the R4000-a-bottle Lawrence Graff Reserve Cabernet Sauvignon selection. Also, knowing that Tim likes but does not love sweet wines, potential 98 or 99 point candidates here include the Vin de Constance, last year’s Sweet Wine of the Year, the Mullineux Olerasay No.2 Straw Wine and perhaps even Chris Alheit’s new straw wine as rated 98/100 points by Winemag’s own editor. Who knows… but when I last spoke to Tim recently, he commented that I “may be surprised…” when the results are announced. That could mean one of many things… or indeed nothing!

But more important than any pronouncements Tim Atkin may make on Thursday, has been listening to all the enthusiastic discussions on social media networks as consumers make THEIR own judgements on which wines they have identified as being worthy of stardom. With all the writing and wine reviewing I personally do, I try to never forget for even a moment that the consumer is king! What they think is the most important indicator for a producer’s true path to success and stardom and all of us reviewers would be very wise never to forget this fact. You can’t fault a customer who puts their own hard-earned money where their mouth is!

Greg Sherwood MW: The shrewdness of the premium second labels

Wow, what an incredibly successful event was the Cape Winemakers Guild Auction 2020  completed late in the evening of 2 October with most of the wines realising some really impressive...

Greg Sherwood MW: In praise of the annual CWG Auction

In early 1996, I decided to up roots from my own slightly economically challenging times in Cape Town working for a small accounting software firm and reluctantly return to the...

What does greatness require of a wine producer? It's an age-old question, one which those of us in the world of marketing agonize over day today. But when your own...