Greg Sherwood MW: Why is the South African wine industry so consumed with introspection? 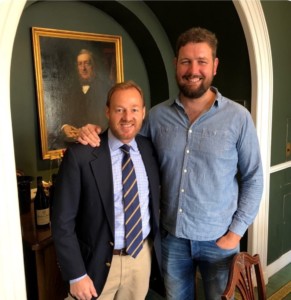 I have always said, “Distance gives you perspective”. But there are certainly many frosty cold November mornings here in London where the mix of icy fog and smoke from anthracite fires hangs heavy over the rows of Victorian terraced houses with a not too dissimilar pall to that belched from the shack chimneys on the Cape flats, the smoke flowing industriously from warming early morning fires that rejuvenate households ahead of another hard days work on the sunny Cape Peninsula. While the sight and smells might be similar, that’s where any further similarities end, with the prospect of pulling one’s running shoes on for an early morning dawn jog in the frosty dark definitely quite removed from an invigorating 10km run along a sunny Atlantic seaboard bathed in early summer sunshine and tempered by a cooling sea breeze from the perpetual blue Atlantic breakers.

Mid-pandemic, mid-second lockdown and amid the economic meltdown being expertly curated by the current UK government, it is still fascinating to watch how the local South African wine industry instead of coming together to hatch a grand Marshall Plan type scheme to escape the ravages of the Coronavirus pandemic and assault the world’s export markets with the exceptional array of vinous treats that currently abound in the local market, the preferred order of the day’s activities reads: squabbles about the Platter’s Guide, when will SA stop calling its Bordeaux blends Bordeaux blends, has score inflation raised its nasty head once again, can South African panel judges be trusted to taste blind and if the answer is yes, does South Africa even have enough qualified wine judges?

It has to be said, in all the global wine travelling I have done, prior to the Coronavirus pandemic, I have never heard another country’s wine industry as introspective and insecure as our grand established wine industry in the Cape. The whole insecurity dilemma seems to be a reoccurring nightmare with the frequency of a well-versed scene from groundhog day. But as I said to start with, distance most definitely gives one perspective, perhaps even extra perspective, and I also appreciate that not living day-to-day in the slog and grind of the Cape wine trade does lighten the load and frees up my own opinions somewhat. However, the incessant drone of the groundhog day alarm that woke Bill Murray up endlessly in that famous 1993 Hollywood film is frighteningly similar to the unremitting and perpetual drone of the South African wine industries own introspective agonising, finger pointing and squirming.

Perhaps it’s just that us folks overseas tasting, reviewing, buying, shipping, selling and generally promoting South African wines 24-7 are less drawn into the peripheral debates that are, admittedly, sometimes necessary for an industry to change, evolve, improve and generally do better. But actually most or all of my listed crimes and misdemeanours strike me as mostly self-centred industry bitching. Times gone by have shown that there can be no better whipping boy than Platter’s, of course. If my memory serves me correctly, Platter’s Guide hit the rocks one year with a meagre 11 (or was it 13?) Five Star wines… that inevitably lit the most explosive of Vesuvius eruptions in the Cape industry. Understandably the early days of the post-1994 wine era were indeed times of slim pickings, wines here not great and many of today’s rock star winemakers were only finishing school or starting their university endeavours. Simply put, the industry and its commentators are correct to examine the viability of the Platter printed book model just as the editors of winemag.co.za have been required to examine their own structure over the years. However, the hysterical egg throwing surrounding the 200-plus Five Star Platter wines (out of over 7 000 wines) seems a bit of good old bitching for the sake of bitching to me. Having risen from circa 110 the year before, everyone should appreciate that next year, the tally may very well be 150 or 180. Who knows? You just can’t panic at the sign of a nose bleed. When blood starts flowing from multiple orifices, then I agree that it might be time to panic. But we are not there, not nearly, not even close.

As for the other topics, perhaps I am being a bit harsh in calling all these debates whinging or bitching. There needs to be discussion and deeper thought in order for the industry to move forward. But… with regards to the Bordeaux Blend terminology debate, it is worthwhile reminding naysayers that the American market went through this same wasteful exercise that hatched the Meritage Association. While I presume it still lives on in one form or another to promote “American” Bordeaux Blends with out using those exact dirty foreign words, as an organisation globally, it undoubtedly remains a still birth. More pertinently, in a South African context, I would suggest that commentators first try and resolve the calamity of the Cape Blend category before they start trying to confuse consumers with clangers like Cape Bordeaux Blend.

Ironically, the term Cape Bordeaux Blend does actually have a certain ring to it and like the highly successful Port style euphemisms developed over time such as Cape Ruby, Cape Vintage and cape Tawny, or even Cap Classique for Méthode Champenoise sparkling wines, we do seem to be genuinely blessed to have these handy, regionally specific and highly attractive epithets to call our own! Just think of all the poor English wine producers running every morning across the foggy, muddy, chalky South Downs rattling their brains to come up with even just one acceptable term for English Sparkling wine that isn’t “Cuvee Britannique”.