I admit I’ve had a difficult relationship with rosé. I like to think of myself as an open-minded wino, a “don’t knock it ’til you’ve tried it” kind of girl. But for a long time rosé was my nemesis – no, my kryptonite. I had nothing against it in principle. It wasn’t even because of the sugary sweet monstrosities that dominated the shelves for so long (I actually have a sweet tooth and while it’s a headache waiting to happen, I don’t find the pink syrupy numbers nearly as offensive as the average wine snob).

No. My aversion to rosé was deeply personal. I was once embroiled in a week-long battle with the pink powerhouse. I battled and I lost – defeated by the rosy hues and cherry candy flavours. You see, I completed a sensory training course (circa 2006) at the Stellenbosch University Department of Food Science, and the subject was rosé wine. For a full week – Monday to Friday from 08:00 to 17:00 – I swirled, sniffed, spittooned and suffered through a line-up of rosé wines. Perfecty average. Perfectly cheap. Perfectly miserable.

We would analyse them, comparing aromas and flavours in the wines to the actual fruits and foods they come from. Endless tasting. Painfully rigorous scoring. More tasting. Academically, a truly great experience. But one which decimated any inkling of an urge I ever had to drink pink. No word of a lie, my lips did not touch a drop of rosé for six years. I’d even wave away the traumatising pink liquid at wine tastings.

Around 2012 I made a decision to stop being a wine bigot and ended my crusade against the blush behemoth. As I simply don’t trust a critic or writer who outright refuses to drink or taste a particular cultivar or style, I couldn’t very well write about wine with the same hopeless attitude.

The timing of my reconciliation with rosé could not have been better. Consumers have always loved a bit of pink in their glass, but it’s been exploding over the last decade or so. Consumption between 2007 and 2014 more than trebled, with both the US and UK markets leading growth with double digit annual figures. Locally, our winemakers have been conjuring up a flurry of fresh new wines. Production of rosé is not regulated in South Africa (it can be either saignée or simply blended), so the scope to make it is quite wide. Pinotage rosé has become a popular sight and light, crisp Provençal styles have taken local consumers by storm.

And I could not be happier.

Enter Rosé Rocks – South Africa’s first rosé wine competition. Organised by Spill Brand Communications, the competition was conceived to raise the profile of rosé locally, keeping in line with its already growing popularity. I already hear the groans of “not another competition” but since this one is exclusive to the style (yes, other competitions have rosé as a category but none with it as exclusive focus), it’s unique. 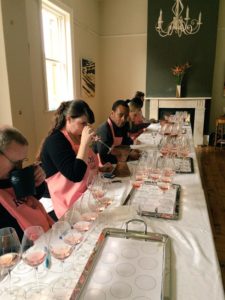 I waded into the arena of competition judging for the first time last week as one of the judges for the Rosé Rocks competition. We were superbly chaired by Woolworths wine selector Allan Mullins. The tasting was done blind (“The way all competitions SHOULD be judged!”, she yells while running from the wine critic lynch mob) and results will be audited, ensuring everything remains squeaky clean.

I have no idea which wines came out tops, I have to wait for the results on the 30t September like everyone else. I can tell you that of the roughly 160 wines entered (including a find crop of MCCs) around two-thirds were dry/off-dry. The overall quality of entries was genuinely thrilling to see – in the flights I tasted I did not encounter a single wine I would consider bad, undrinkable or even unpleasant.

Summer is coming and rosé is taking a clear lead this year. Even the manliest of men are moving to (b)rosé. I promise you’ll be… tickled pink.