Michael Fridjhon: No going back for SA wine

The evening before the first day’s judging of the Old Mutual Trophy Wine Show is traditionally the occasion for the annual Old Wine Tasting. The event dates back to the early 2000s and was originally initiated so that an array of old wines which I had assembled for an article commissioned by The World of Fine Wine could be shared as widely as possible. Given concerns about the size of the “bubble” at the time of the judging last year, and again this year, we’ve now gone two years since the old wines collected for this occasion have been exposed to any kind of scrutiny. Accordingly, I decided that I would gather up a few bottles and serve them to the panellists over dinner after the first day’s judging at the end of May. 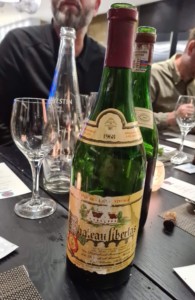 As always there were a few disappointments, wines which may never have impressed or which had been kept too long. But the standout wine in the line-up was a 1968 Chateau Libertas. On paper, it didn’t look all that promising: an ullage of over 5cm, and a provenance which suggested it had tracked the vagaries of climate change for a full half-century without any kind of insulation or protection from the elements. Despite the odds stacked against it, it was fabulous, and it showed no signs of fading even by the time we had reached the end of the bottle.

Inevitably there was a discussion about the wine itself, but more widely, about the way wines were made then and whether any of the vastly more expensive icon wines produced today would survive into the second half of the 21st century. Some of the group – which included the editor of WineMag – went so far as to say that, looking at the ancient Chateau Libertas, the modern wine industry had “lost its way.”

Lining up the greats of the past with those of the present is a fruitless exercise, the equivalent of comparing Don Bradman and AB de Villiers, or Muhammad Ali and Rocky Marciano. Fifty years ago everything was different – not merely the weather patterns. Surprisingly little was known about the chemistry of wine production (and much of what was known wasn’t necessarily part of the curriculum for winemakers in the Cape.) All fermentations were probably natural – inoculation with commercially produced yeasts generally dates from the 1970s. The mechanism of malolactic fermentation was only properly understood at the beginning of the 1960s. Producers never had access to sophisticated laboratory analyses, and probably wouldn’t have known what to do with the information. It was winemaking pretty much by the seat of your pants.

It is of course impressive that so many of those wines have both evolved, and survived. They had freshness from the outset and this seems to have contributed to their longevity today. They were lower in alcohol – generally 12% or less – but they weren’t “green” when they were released: they were commercial wines, produced in quantities large enough to satisfy the demands of a growing wine market. Much of what went into the Chateau Libertas blend of the 1960s was cinsault, harvested mainly from bush-vine vineyards. Arguably this is what gave the 1968 its longevity and its balance: naturally lower-yielding dry-land vineyards not forced by trellising to crank out more fruit than they could sustainably produce.

This makes the Mullineux’s Leeu Passant current-day enterprise a particularly interesting foil for this debate. On paper the Dry Red is modelled on the old-style Cape blend model – Chateau Libertas or Rustenberg Dry Red – replete with claims about ancient vineyard yeasts, and co-fermentations of the kind practised in South Africa at the time. They are certainly the most authentic attempt to go back to the crossroads at which the industry is presumed to have taken the wrong turning.

Tasting their latest releases I very much doubt that their Leeu Passant wines will ever turn out like the classics from the 1960s and 1970s. For a start, it may be impossible to turn back the clock: winemaking today can never be the way it was in that more rustic, prelapsarian era, even if some of the grapes, which go into their Dry Red, have been harvested from seriously old bush-vine vineyards. It is also possible to argue that what makes them strike a chord for so many people is the idea of what is being attempted. If this assumption is correct, their appeal is vested in a form of nostalgia: we wish them to become great because we wish our idealised sense of the past to become a reality.

There’s no doubting the interest value in what the Mullineuxs are doing – and this should be sufficient reason for those well-heeled enough to buy their Dry Red. (For my money I’d rather buy the Chardonnay, the Wellington Cinsault, and perhaps the Stellenbosch Cabernet.) Cellaring the Dry Red for the express purpose of rediscovering the past is a fool’s errand: the “good old days” were never all that good – it’s better to look forward. Clive James said it perfectly: “What’s gone is gone, sweet prince, what’s done is done”.