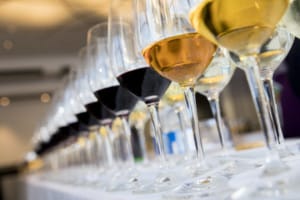 A line-up of wines at the Old Mutual Trophy Wine Show.

We find ourselves in the midst of a concentrated and very intense show judging and results season. Covid-19 made this inevitable, though, to be fair, most of the competitions and publications have always aimed to get their “good news” into the media in time for festive season sales. What made this year different was the delay in getting the judging done. To be safe, show organisers had to wait for lockdown level 2 and the end of the alcohol sales ban: no one delivering samples to a judging venue wanted to try to explain to the police at a roadblock that the wines weren’t actually for consumption – just for tasting and spitting out.

In the next three months everything from the various cultivar class events (Sauvignon Blanc, Chenin Blanc and Pinotage Top Ten) to the Old Mutual Trophy Wine Show, Michelangelo and Veritas, as well as Platter’s and Atkin Special Report, release their annual results. All of this activity is the culmination of an extraordinary amount of work – though not all of it represents the same kind of activity. Competitions taste blind, often within strictly defined parameters. Publications – online or in print – work with different universes, different methodologies and target different audiences.

Wine shows can only judge what is on the tasting bench. Many South African producers elect to avoid them, preferring to nurture their selling message rather than risk exposing it to impartial scrutiny. They imply that panels may be defective, or incapable of discerning the unique attributes of their products. Terroir, they suggest, cannot be revealed when a young wine is sitting anonymously in a glass. It’s only by engagement with the critic that its virtues can be expressed.

The Platter’s guide has a hybrid system which has more or less stood the test of time: the first round is judged sighted, with the five star candidates taken to a second round judging. It’s easy to find flaws in the methodology (for example, the five star panels know they are only looking at top wines, and this narrows their scoring range) but the system has managed to preserve the stature of the seeded players and to give the unknown parvenues  an equal chance.

Atkin writes about the wineries and producers he’s been tracking, adding newcomers from every so often. All of the wines he rates and ranks are tasted sighted, and after extensive discussions with the wine-makers. Many industry insiders secretly ridicule the “clubbiness” of this approach, the “pick me, pick me” plaintive cries of those on the outside wishing to be admitted, and the ever-inflating scores which work like PPE procurement contracts to keep the cadres on the inside loyal to the party. But these observers partly miss the point: Atkin champions the indisputably saleable, the brands whose presence and polish justifies their place on his platform, the arriving and the arrived, not the unwashed beyond the pale. You wouldn’t invite the homeless into your home. Atkin is clear about his criteria and he’s only interested in guests who know how to mingle.

Where does this leave the unbenchmarked outsiders, and the buyers who want the excitement of discovery, rather than the certainty (and generally higher prices) of those whose future is secured? The answer is not particularly well catered for, but this isn’t Atkin’s responsibility. It’s a perennial problem for producers and adventurous consumers. If the very small wineries don’t enter shows, because they fear them, or simply because they can’t afford them, it’s not anyone else’s job to put them on the map. Their best bet is the Platter’s Guide, once they’ve made it through the hoop of a sighted tasting.

The world of wine is a hard, tough place: the leading lights of five or ten years ago are already suffering from the tarnish of the elapse of time, of the desire of the market for the new and unobtainable, rather than the polished and predictable. Of course there are exceptions, but if you extend the time frame to a decade or two, you’ll swiftly discover that almost all of the heroes of 2000 or 2010 have been usurped, downgraded, left like wall-flowers because they couldn’t keep up with dance moves of the next generation.

Immortality in the New World wine scene – especially ours – is frankly improbable: the lifespan of most brands is about the same as that of a mid-size dog. Eight years if you’re lucky, twelve years if you have a good vet. The Old World big names have enjoyed a much longer run, though now it is the regions – rather than the appellations – which feel the cold chill of changing fashion. Bordeaux has been usurped by Burgundy (for the moment); the fabulous German rieslings, once more sought-after than the great wines of France, and priced accordingly, now lurk in the shadows despite the best efforts of writers and aficionados. The promiscuity and skittishness of the wine scene reflects the mood of the market rather than the agenda of critics and show judges.