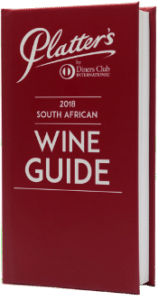 So the 2018 edition of Platter’s South African Wine Guide is out – 111 wines out of over 8 000 wines featured rating 5 Stars (see here). Isn’t that rather a lot of 5 Star wines, you might ask? Well, it’s a 429% increase on the 21 wines that managed the guide’s ultimate accolade in 2008 but it’s not as many as the 149 wines (out of some 1 700 reviewed in total) to score 95 points or higher on the 100-point quality scale that Tim Atkin had in his South Africa Special Report released earlier this year.

In the lead-up to this year’s launch, Platter’s made something of a fuss about the fact that for the first time ever, bottle stickers with the ratings on the 100-point scale would be available – individual Platter’s tasters use the 100-point system when making their initial sighted assessments, all wines scoring 90 points or higher going into a second round of tasting conducted blind, the final score then converted into a star rating.

Platter’s justifies having both Stars and scores available in that the former has more resonance locally and the latter more internationally. Whatever the case, it would be fascinating to know what the guide did in fact score Magnetic North Mountain Makstok 2016 and Radio Lazarus 2016 from Alheit Vineyards or Family Vineyards Pinot Noir 2016 from Newton Johnson, all three left on 4.5 stars. Conversely, there were no 100-pointers or we would’ve already heard…

Turns out, however, that those scores on the 100-point scale are only available if you take out a digital subscription with the ink-on-paper, physical guide still making reference only to star ratings. The guide itself costs R260 a copy while the one-year digital subscription costs R175 and provides access to all ratings and reviews since 2008 through the website and apps. This makes digital looks like a pretty good deal until you get to the Google Play Store to discover that the Platter’s app has an average rating of 1.9 out of a possible 5 (after 29 reviews) which makes me, at least, reluctant to download.

More generally, though, that list of 111 wines rated 5 Stars is pretty respectable. Reviews and rankings are necessarily approximate but not entirely useless – it is only natural that producers should seek recognition for their endeavor and it is equally only natural that consumers should want assistance in making their purchasing decision when confronted by a hugely over-traded market.

Platter’s is a noble undertaking and remains influential although I’m not sure it’s status as the “bible” of SA wine as somebody referred to it on Twitter recently is still warranted. The South African wine industry has become too fluid and dynamic, the debate about what’s hot and what’s not too fast moving for an annual old-media publication to be the first and last word on the matter. Clearly the brains trust behind it is wrestling with new media options but will they succeed?

Platter’s Wine Guide 2019: The best wines to try this year

Another measure of SA wine’s coming of age is the vast number of personalities and ventures seeking to deliver commentary and criticism. Inevitably, it’s only when the wines of a...