It was the Dutch who were the great establishers of the Cape wine industry, but as far as modern wine settlers go they’re just outnumbered by their Belgian neighbours according to my count*, with two properties we could call Belgian-Dutch. A few years back, the Belgian contingent was strengthened by the arrival of Tom Heeremans (his wife Tatjana Holkina starting, I’d guess, the list of Latvians). Tom bought the Paarl farm that’s the home of Tempel Wines from a Swede – let no-one say that Cape winemaking is not deeply touched, to its great benefit, by internationalism!

Tom’s background is in sales (of what I didn’t venture to ask), latterly in the Middle East – which makes it nicely appropriate that Tempel is named for its old farmhouse having once served as a Jewish place of worship. But Tom also has wine and liquor in his blood – his father was an oenologist, and he has long owned a gin plant in Belgium, via which he’s already built up useful European connections in the on-trade. His plan to settle on a wine farm in the Western Cape seems to have been gestating for a long time.

Tempel farm is a very pretty, small property almost on the edge of Paarl town – just six gently undulating hectares – with mountain views and clusters of trees along the Berg River. All is clean, bright and white, with a pleasingly disposed werf (I can’t think of a better term for the harmonious cluster of garden and work and dwelling buildings, including cottages to let), the vineyards lying all round. There’s a feeling of energy, of work being done proudly, but pleasure not neglected.

The virused pinotage that was here when Tom arrived has been pulled out (he perhaps regrets not having kept the best part, but still), and he’s making the farsighted shift to Mediterranean varieties which should do well in increasingly hot and dry conditions (irrigation from the river is laid on).  Two infant hectares of Grenache, mourvèdre and tempranillo are thriving under the guidance of consulting viticulturist Marko Roux; two more, of tempranillo, grenache and cinsault are to come shortly. Most appealingly, swathes of fynbos are being encouraged alongside the vines. Grapes are already being bought in for the modest range of wines, and no doubt this will continue, to complement the home vineyards. 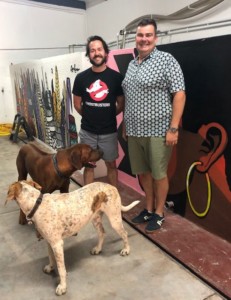 I visited the farm this week and tasted firstly from the barrels (and concrete eggs) of the 2019s, with Tom and his young winemaker, Neil Marais, in his airy cellar with big windows overlooking the vines, and old open concrete fermentation tanks adorned with some impressive “street art”. Possibly most impressive of these nascent wines were the tempranillo – really a wine to look out for next year – and a good grenache, with components from Piekenierskloof and Wellington. Neither of these varieties was included in the three 2018 bottlings, which are now available here and there (mostly in the Western Cape, it seems, apart from some smart restaurants in Europe). See details on the Tempel website.

I’ve lived with those three over a day or two now, having tasted the Sorgvry Cinsaut, from Wellington grapes, and Oogwink Shiraz, from Elgin, some months ago for Platter, since when they have beneficially settled down and harmonised. The Skipskoon Pinotage was not then available; its Afrikaans name refers to the vineyards having been cleared away entirely, so this is very much a once-off. And one of a quality that occasioned the possible regrets I earlier attributed to Tom. It’s a lighter style of Pinotage (little more than 13% alcohol), though not as light and fresh as, say that of David & Nadia. Moderate, grippy tannins well integrated and a decent acidity; good and rich spicy fruit. Yesterday I found a hint of varietal bitterness on the finish that I appreciated, but today I looked for it in vain – subtle bitterness is frequently an evanescent, unreliable quality, I find.

A tendency to comparative lightness and freshness is what the Tempel team are looking for, but in all three of the wines there’s also a real richness and concentration of sweet fruit, and a velvety softness. The practice of early bleeding off some of the juice must contribute to this. I do wonder now if I wouldn’t prefer more of the freshness and lightness and less of the richness and concentration – is the bleeding really useful?

Sorgvry Cinsaut presents itself rather similarly to Skipskoon. It has varietal perfumed charm, but the element of richness working with the dry, but now balanced and integrated tannins makes it that welcome bit more serious and, probably, age-worthy than many examples. And justifies the bleeding, I suppose!

Oogwink Shiraz is the wine that has grown on me most as the levels in the bottles have dropped. It does have a touch of sweetness to the fruit, but it’s well balanced, softly textured, with tannins that are firm and dry, and 25% new oak is increasingly unobtrusive at all. It’s riper-tasting than some Elgin Shirazes, without any insistent herbaceousness. At R280 ex-farm it’s the priciest of the three (Sorgvry Cinsaut R30 less and Skipskoon Pinotage R100 less), but as things go for shiraz these days that’s a reasonable price for this quality.

In short – Tempel Wines is looking to be a welcome recreation of the brand and a happy addition to the new wave of Cape wine. And a charming place to visit (or stay) when you’re in Paarl.