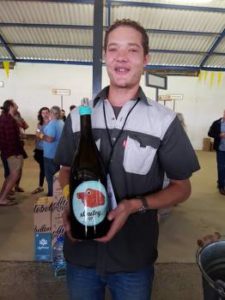 It began at the inaugural Swartland Revolution, the story of Silwervis wine, which you probably know of. The story continues into Avant Garde Wines and Terra Cura, which you’ve perhaps not yet heard of yet, but will). It’s a satisfying tale. At that 2010 Revolution’s charity auction, winelover Michael Roets, with no winery but with understandable trepidation and (surely) some inchoate grandeur of hope, bought one of those fashionable concrete eggs made in France by Nomblot. He paid R40 000 for it – but what made the deal a real bargain was the spontaneous promise by Eben Sadie and Adi Badenhorst to fill the egg with Swartland chenin blanc.

A number of people – perhaps a trifle inebriated, which explains their rashness – promised to buy some of the wine, though the grapes from which it would be made were as yet scarcely visible on the vine. They scrawled their email addresses on the egg. The wine was made and was good and interesting (ahem! there was some significant bottle variation…), with a weird label designed by a friend of Michael Roets – Conrad Botes of Bittercomix fame. The name is pretty idiosyncratic too, of course – “silvervis” (silver fish) is a slang term for the good old metallic “papsak” of bibulous and ambiguously evil memory.

Subsequent vintages have followed and there’s now also a lovely Silvervis cinsaut, and two  splendidly expressive and interesting multi-vintage, and less expensive, wines under the Smiley label (more outrageous weirdness which I have neither the time nor the stomach to explain right now). And yet to come from the expanded and consolidated team – of which more anon – is another range, with the inaugural Terra Cura Syrah 2015 scheduled for release early next year.

As for the historic concrete egg, last week I encountered it for the first time since I scribbled my contact details on it back in 2010. The names it bears are fading now, but the egg contains the latest, 2016, vintage of Silwerwis chenin. I had travelled out to the Voor Paardeberg, to the old and unassuming cellar which the Avant Garde wine company are renting to make their wine. And there the egg stood, stolidly prepared for a sentimental reunion. I did taste the wine from it, though the morning’s focus was on 2015 shiraz in an array of old barrels: winemaker Ryan Mostert had invited me out to taste the wines from seven Swartland terroirs before they were blended for the final cuvée. I was relieved to identify a few of them correctly, and admire them all in their different ways.

Ryan is the third member of the Avant Garde team, if Michael Roets is the first (such is life that the financial powerhouse must count as number one) and retailer and Young Gun enthusiast Roland Peens is the second. Ryan’s invitation to join them came, fittingly enough, at the 2013 Swartland Revolution, while Ryan was still working with the splendid Reyneke team of winemaker Rudiger Gretschel and vine-hugger Johann Reyneke (who were to generously support his move). Frankly, I don’t think they could have done better than ask this utterly passionate and forthright young winemaker to become part of a team to make something new, “natural”, Swartland-focused, and ambitious. It took him a week or so, however, to resolve the conflicts and decide “we have to do this!”.

That’s it, basically. For now. The story continues, and I’ve tasted some of the next chapter or two: there’ll be a single-terroir 2016 syrah, as well as a blend, full of concentration and character. I’m entirely confident they’ll make good reading. This is the sort of story that makes Cape wine what it right now so excitingly is.