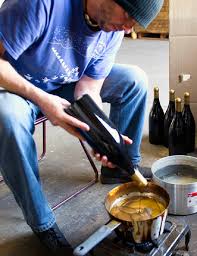 It seems that the proliferation of synthetic wax capsules on wine bottles – especially those of the more new-wave producers – is something of a South African speciality. Clearly I don’t get around enough, as I hadn’t realised it. But Jo Wessels (winner of the 2018 Best Sommelier in South Africa competition) tells me that, at the smart German restaurant where he works, his assistant sommelier “once remarked that when he needed to find a South African wine in our cellar, he orientated himself by searching for the bottles with wax capsules”! (More from Jo below.) Wax is a good idea, in fact, for small runs of wine – cheaper than specially ordered metal capsules and not needing fancy equipment; but mostly, I suspect, because it gives the bottle a “by hand” sort of feeling that goes well with claims of artisanal, minimalist winemaking. And arguably, too, a wax seal provides greater protection against oxidation.

This is the time of year, when I’m opening so many bottles for my Platter’s tasting, that my thoughts frequently turn (often quite viciously) to closures and capsules. I’m fairly neutral in the cork–screwcap debate, but never so fond of screwcaps as when I have half-a dozen bottles to open, reseal and often enough return to a fridge where there’s only room to lay them on their sides. Then I fully appreciate the joys of screwcaps (especially the heavier ones with an internal thread – they even look quite good), despite the trivial tinkle they make when falling to the table.

When it’s a matter of grandly packaged wine, with long corks to draw and foil capsules to cut, the procedure becomes merely irritating, as I forget the anticipatory pleasures of a slow, ceremonious preparation for vinous satisfaction. Ceremony be damned – all I want is to move on. If the capsule is fairly loose, a trick I learned from another sommelier comes in handy – simply twist-wrench it off, before wielding the corkscrew. Or, although I have a proper foil cutter to hand, I might make a crude vertical rip through the metal or horribly plastic capsule with the tip of the corkscrew, and peel it off.

Wax seals have their own problems. Fortunately, it’s rare these days to come across hard and brittle wax that needs to be painstakingly and messily stripped away before the vulnerable cork is revealed. Generally, it’s nice and pliable – but the degree of softness, as well as the thickness of the wax, will vary, making it impossible to have one approach that works well on all bottles.

Mostly (part laziness, part impatience, part because it usually works well), I just apply the corkscrew and pull the cork through the wax – which will give quite easily unless it is very hard, in which case you must chip away with a knife, making a horrible mess and seldom succeeding in cleaning the wax from the glass; but fortunately, that is increasingly rare. Drawing the cork through the wax usually works well enough, and occasionally near perfectly. But sometimes it leaves a fringe of wax standing up around the bottle lip, as ragged and ugly as badly chewed fingernails. And often, even when it’s neat, the wax still comes so close to the mouth that you’d have to pour the wine over it, which seems wrong.

Occasionally, if the consistency of the wax is perfect, using a foil cutter as one would for a conventional metal capsule works perfectly: the wax lid will lift off, leaving the top of the bottle beautifully clean – though a punctilious sommelier would still want to give it a good wipe with a clean napkin, I suspect.

Talking of which, the above problems (and even the neater solutions) are also those, I discovered, that makes Greg Mutambe, head sommelier at Cape Town’s 12 Apostles, to be “not a fan of waxed wines in general and avoid such bottles” when possible (I wonder if producers keen on getting their wines into smart restaurants consider that possibility?). He encourages producers, he says, to use nicely pliable wax.

Greg might be interested in a technique that Jo Wessels employs. Incidentally, I asked Jo if the sommelier authorities (a fearsomely particular bunch) had any guidelines on the matter, but it seems not – though he said he’d double check if there were any service standards set by the Court of Master Sommeliers or the Association de la Sommellierie Internationale. Jo himself also doesn’t find that pulling the cork though the wax is satisfactory. Sometimes, he said, when confronted with wax, “it’s acceptable to present a bottle to the guest, but then to open it in the back-of-house to hide the mess. The dilemma comes when it entails a unique bottle that should be opened with some ceremony at the tableside.”

He’s come up with what he considers an elegant and clean solution to the problem, one that I hadn’t even considered, and he even sent me a short video of his solution in practice. As he says, “it entails melting the wax with an open flame and then wiping it away with a tissue or paper napkin”. The open flame he uses comes from a cigar lighter, and it just needs a few seconds of judicious application to melt the wax sufficiently to allow it to be wiped away neatly (not using a restaurant napkin, he notes, in order to avoid angering the laundry staff – sommeliers think of everything).

Not having even a cigarette lighter to hand, I gingerly tried melting the wax on a bottle of Alheit Wine Dark Sea at a low flame on my gas hob, and I must say it worked brilliantly well – if not as neatly as Jo’s elegant effort. Certainly a trick to remember.

Read more on the subject here.