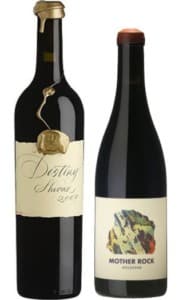 Wax and its various manifestations.

Somewhat irritated by grappling with wax capsules on wine bottles, I recently wrote about how best to cope with them, given their annoyingly varying consistency – from brittle to overly pliable. I was surprised to find my own mild displeasure with wax to be generally greatly magnified for the sommeliers I approached. Greg Mutambe, for example, is “not a fan” and went so far as to say he tries to “avoid such bottles” when possible.

Given the number of new-wave local producers who wax their bottles, I thought it worth having another look at this problem. Could sommeliers’ resistance, arising from reluctance to deal with the problems that wax brings to their meticulous service, even amount to a significant problem for some waxing producers?

Incidentally, though, it occurred to me to wonder about the modern history of the practice in South Africa. At an amateur level, I know it goes at least as far back as the 1980s. When I returned from living in England in the latter part of that decade, and came to live in Cape Town and grew interested in wine, I had a cousin here who used to wax the bottles that he bought, to enhance their resistance to oxidisation. Not only grander bottles – there was waxed ten-year-old Simonsvlei Cabernet Sauvignon (which seemed wonderful stuff to me, I remember).

The first commercial wax capsule that I can recall, however, was Mont Destin’s Destiny Shiraz, maiden vintage 2002: a big, plush Paarl wine, in a bottle as impressively showy as its contents, with gilt wax not only serving as seal, but artfully dripped and draped over the bottle, a puddle of it embossed with, I believe, a family heirloom ring. The current vintage appears to be 2013; the kitsch aesthetic is unchanged; the price is some R600 a bottle.

That’s altogether about as far as you could get from the spirit of, say, Stompie Meyer’s Mother Rock range of natural wines – where the wax ranges from a discreet little button on the top of the cork to more or less short capsules. In fact, that little button of wax, which I can’t imagine any sommelier objecting to dealing with, serves the utilitarian purpose admirably. That’s a point made by Jean-Vincent Ridon, French-born local and a runner up in the 2018 Best Sommelier in South Africa competition, who describes the little button as a “crown” and says it works as well “as a full neck waxing”. Jean-Vincent is pretty grumpy about the modern emergence of waxing – a practice that he feels “should be reserved for wines aimed at long ageing” (by which he means 20 years at least). “I hate”, he says vehemently, “producers using wax for bad reasons!”

Sommelier Jo Wessels, whose problems with wax capsules and whose technique for melting and wiping them away I spoke of previously, got back to me with some further thoughts on the topic after he’d chatted with his colleague Marc Almert (1991 Best Sommelier in the World for the Association de la Sommellerie Internationale). Almert confirmed the absence of professional standards for removing wax closures. But he mentioned, said Jo, “seeing colleagues in 3-star Michelin restaurants simply using port tongs to break off the whole neck of the bottle”. That’s radical wine-service for you! Think about that next time you dip your bottle-neck in wax, guys. Jo’s next paragraph is worth quoting in full:

“Marc raised some interesting points. He agrees that for retail scenarios, wax arguably helps for a wine to stand out on the shelf. But in a restaurant, it has the dilemmas we’ve addressed. A question was raised whether it might actually hamper a sommelier from selling or serving bottles with wax seals (as it requires extra time and effort to open the bottle). It’s something I haven’t really thought of, but it could perhaps feature subconsciously. I know that when it’s a busy night at the restaurant and I need to offer an aperitif, I avoid mentioning/selling cocktails, as these are laborious and time-consuming. Could wax capsules plant a similar seed in the mind of a somm?”

I approached David Clark of Ex Animo, former sommelier, almost forgivably Australian, and arguably the wine distributor that small and interesting Cape producers should (and do) most want to represent them. He generally confirmed most of the reasons behind sommeliers’ dislike of wax closures and offered an actual case study: Thorne & Daughters Copper Pot Pinot Noir didn’t arouse much interest in the restaurant trade until it moved from a wax capsule to the standard metal one (like the rest of the range): that seemed to make it more attractive. Just one minor example, that is, but perhaps worth noting.

David also pointed out that at least a few producers that started off with wax have now moved on to the orthodox metal capsules, and he mentioned Alheit and Craven as examples. The reason seems largely to be the excessive time and effort involved in waxing, especially as one’s wine-range grows. That “hands-on”, artisanal image that wax has can, ironically, prove to be rather too costly…. But sommeliers at least might send up a small cheer each time a producer invests in a capsuling machine.