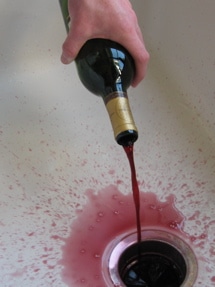 With the recent decades’ undoubted improvement in Cape wines at all levels, there’s not a lot of really bad stuff out there, is my impression (though my sampling doesn’t go down very low, and I dare say the back doors of some large wineries on Friday evening still see out some more than dubious stuff to a sadly undemanding clientele). But the Platter’s guide doesn’t award as many zero-, half- or one-stars as it did a decade back: In the 2020 edition only two half-stars (glossed as “unexciting”), editor Phil van Zyl tells me, and three one-stars (“very ordinary”) – if there were a zero-star wine that would mean, in ironically generous Platter-speak, “somewhat less than ordinary”.

Of course, there’s bad and there’s really appalling, and I’m talking about the former. But occasionally, I am obliged to wonder why, given the lack of excuse for technical incompetence, there’s any really ropey wine at all – especially at a rather more ambitious level. (In fact, I have realised that ambition comes into the badness – as I’ll amplify below.)

One can try approaching the topic from behind, as it were, because it’s probably easier to understand what makes for good and excellent wine, and one could work backwards from that understanding. Of course, the primary criterion there is good and excellent grapes. And nowadays the mantra is that the less you do to them in the cellar the better (being “natural”, if you dare use that word) – but, as I have suggested before, a remarkable number of choices and skills are involved in “minimalist” winemaking. But look at the producers of the best wines and you find other shared characteristics, apart from access to vineyards – whose quality is, anyway, often at least partly of the winemaker’s doing. Intelligence is one (shading into a hard-to-define genius/artistry), hard work is another. To instance the Cape’s best-known winemaker, it would be hard to overestimate the sheer effort put in by Eben Sadie over the years, even just in his visits to hundreds of great vineyards and cellars around the world and learning from all this experience. (And how can you make good wine if you don’t know what it tastes like, which I think too many of our winemakers don’t?) But to instance another winemaker – I can’t help feeling that there is also some magical touch of winemaking genius, and while Eben and others no doubt have some of it, the winemaker I always first think of as possessing that genius-instinct, a magical touch, is Chris Alheit.

So, working backwards: poor wine comes from poor grapes and is made by people who don’t know or understand enough. I’m sure that’s a valid generalisation – but not all that useful. Though there certainly are a few untaught amateurs making some pretty funky stuff out there.

I should say a little more about what I mean by “bad wine”. Because so much of wine quality is, to me at least, comprehended by the concept of balance (with harmony as it’s ultimate expression, when the components in balance become, through the mystery of development, fully integrated and inextricably involved in something new and higher), I think that bad wine is significantly unbalanced, defiantly unharmonious. There are wines with egregious technical faults, too, but those are fairly few (even the notorious “burnt rubber” character doesn’t seem to get spoken of by the Brits these days, and accusations of “Brett” don’t get flung about like they used to).

I must also make it clear that I’m not talking about very simple, ordinary wines, like, say, the hot-country Chenin or sauvignon churned out by the million litres (the sort that gets two or two-and-a-half stars in Platter). There may be nothing very delightful about them, but there’s usually nothing very wrong about them apart from their competent, safe dullness.

To ask about how bad wines come about, I approached another good Cape winegrower (and one of the most thoughtful), Francois Haasbroek, who makes his own Blackwater range and is now also engaged in pulling up De Meye’s socks.

Like me, Francois is most concerned about bad wine at the higher level. He agrees that it’s not any more so much about technical faults. And he doesn’t think it’s always the winemaker’s fault. Sometimes it’s the result of instructions from above – usually instructions to make award-winning wines. A recipe is sought amongst the wines that do well in some high-profile competitions (my suggestions: Michelangelo, Top 10 Pinotage, Veritas), usually involving notable ripeness, high alcohol, toasty new oak, a bit of residual sugar.

Certainly, very effective and “good” wines can be made in that style. The real trouble for the wine comes when it’s a style that doesn’t emerge easily from the grapes that come into the cellar. The only way forward is by heavy intervention with all the allowable additives and subtractions available. But, Francois suggests: “If you try to force something out of the grapes that isn’t there, you’re set up for disaster. Something, sometime, is going to give….”  To do this sort of winemaking successfully, he says, “you have to be superskilled”.

Too often, I’d add, those superskills are lacking. A grapefarmer (or grapefarmer’s spouse, or co-op marketer) who’s got irritated at low prices and low esteem for their own-label wines, becomes ambitious: pick riper, add acid to compensate for the imbalance (and various emzymes and additives that I know nothing about), and then perhaps add some sweet reserve wine to soften the acidity and add some richness of texture, throw it all into heavily toasted new oak …. You end up with a wine that perhaps impresses some customers (and the occasional show judge and other critic), but is artificially and therefore fragilely balanced – never harmonious, and doomed to fall apart.

It’s easy to add too much of a supposedly good thing and end up with a bad thing. Ageing in oak is often great – but leave your decent red in barrel for too long and it ends up dried out and over-tannic. Timing, like balance, is a vital criterion in making good wine (timing of picking above all, but also timing of skin contact and extraction, of ageing, of bottling); and if it’s not understood, bad wine is too often the result.

But, hey, be grateful; there’s not so much of that we can’t afford to ignore it. And plenty of the good stuff – even if the very best is rare and expensive.