There’s a bit of debate around cinsaut these days, with the proliferation of bottlings alluded to by Christian in his recent article. Can one make serious, complex, long-developing wines from it? Is it best as a grape for rosé and light, perfumed fruity reds?  For adding charm and complexity (and early approachability) to splendidly serious grapes like cabernet sauvignon? Such questions are rightly being asked.

To an extent, similar questions are also being asked about grenache noir – at least when it’s made in that lighter style, as it often is in modern South Africa. But with grenache there is no doubt that it is a grape that is capable of making very fine solo wines, as well as working well in blends: various parts of Spain and the southern Rhône valley have conclusively shown that.

Grenache has enormously increased in the Cape. Christian mentioned the growth in varietal bottlings of cinsaut over the past ten years, as evidenced in Platter. For grenache the growth has been even greater. That’s reflected in increased plantings, though the total hectarage is less than a quarter of cinsaut’s. The fact that there are nonetheless more varietal wines made from grenache than cinsaut is pretty significant. 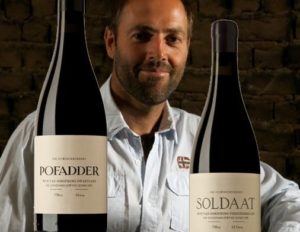 Eben Sadie makes wines from both varieties in his Old Vineyard series: Soldaat from grenache, Pofadder from cinsaut. Last Wednesday he presented both at a tasting of his forthcoming releases for, mostly, some retailers and restaurateurs. They were from 2017, a very difficult vintage for West Coast dryland vineyards (though clearly easy and rewarding compared with 2018), and were pretty good – but I’ll come back to judgements on another occasion. I’m mentioning them here because Eben made some remarks about some lighter-styled reds that I think worth sharing. The wines that he and his winemaker Paul Jordaan make are not in that style, of course: somewhat riper and fuller, with some darker notes, than the currently fashionable “hipster” style, though no one could say that they are overtly powerful or lack freshness.

Eben was emphatic about why this is their choice. “There’s a limit to how early you can pick if you want to show terroir in your wines.” Pick very early, and “the vineyard doesn’t have time to get terroir into the grapes”. In fact, he added, pick too early and there’s no real expression of variety, let alone terroir. And he linked grenache and cinsaut, as the grapes that he thinks most frequently get treated this way in the Cape at present; it’s hard to disagree with his point that many of these grenaches and cinsauts tend to taste and smell very similar – all that brightness and freshness and simple red fruit and perfume. Sometimes, Eben suggested, what’s being bottled is not variety or terroir or vintage, but simply a winemaking philosophy.

I think this is true. And it’s a fascinating mirror-image of what happens when grapes are picked over-ripe. Very ripe grapes tend to also lose specificity – certainly of terroir, but also sometimes of variety. I recall being told by a British dealer highly experienced in Bordeaux that with the “Parkerisation” of Bordeaux, terroir distinctions had become so blurred that he could now seldom distinguish between the appellations.

Well, we’re coming to the end of that winemaker, critic and consumer fascination with wine made from very ripe grapes. While for me there’s much more pleasure to be got from very light reds than from very heavy ones, we must be careful of reactively going too far and too easily in that direction. It’s not a question of greenness, but of vinosity, substance and character. Choosing a picking date is absolutely crucial – which is why the best winemakers are always lurking in the vineyards as harvest approaches: they want to respond to the grapes, not to a winemaking philosophy abstractly conceived in the cellar.