When I first found out, a few years back, that the famous footballer of the 1960s and 70s, Franz Beckenbauer, had joined the German consortium owning Lammershoek, I was asked to keep quiet about it. Well, that discretion is one of many things that have changed at Lammershoek in the past year or two, as was clear at last week’s launch of the revamped range of wines at a beach café on the Cape Town Waterfront. Not only was the great man himself (now an elegant and spry 70-odd-year-old) in attendance, but there’s a flagship wine with his portrait as the background of the label, and named Libero No.5, in honour of his playing position and his jersey number.

Lammershoek, a large farm on the Paardeberg in the Swartland, has had a somewhat turbulent history since the label was launched around the turn of the century, and grapes increasingly went into its own range rather than supplying co-ops and other producers. Ownership changes, winemaker changes … with the most traumatic wrench being the shift to a rather aggressively ”natural” style of winemaking under the direction of Craig Hawkins after 2010. Some of his wines worked well, let’s say, but some didn’t – and in various ways it was for the good of everyone when he and the part-owning Kretzels left, to concentrate on Craig’s Testalonga range – the 2015s of which are so excellently available now.

In came a new winemaker and MD, Schalk Opperman – just in time to vinify the 2015 harvest – and viticulturist Charl van Reenen. It’s clearly a first-rate team, as I realised when I visited Lammershoek late last year and tasted through the wines. I confirmed my opinion at last Friday’s launch, when a few of the estate’s top wines were served with lunch: the fine Chenin Blanc Reserve had relaxed and opened up deliciously, for example (it’s a good buy, I’d say, at R150).

We also tasted the white and red Reserve Blends, previously called Roulette, now under the Terravinum label (at R180 and R200 respectively – also great value in top-end Swartland terms). Just a little pricier are the more experimental, or small quantity wines in the Mysteries range (comparable with the previous Cellar Foot wines), while there are excellent value wines at R85 in the Innocent range – the “innocent” being the little baa-lamb depicted on the label, alluding to the story that Lammershoek (“lambs’ corner”) got its name from the lambs seeking shelter from predating eagles. I’m particularly impressed by the Innocent Pinotage.

Altogether, this extensive range of Lammershoek wines fits in well into the modern, exciting Swartland (their closest winemaking neighbour, after all, is Eben Sadie, who persuaded Lammershoek some years back to sell him the piece of land on which he’s built his cellar and is now building a house and planting a mixed vineyard). And that’s good: with a substantial portion of the Swartland “revolutionary” wines being made from bought-in grapes, it’s important that there be some substantial and significant wineries with their own vineyards – happily, it’s starting to look like Kloovenberg has ambitions to be another such part of the revolutionary Swartland.

There were, indeed, those who feared that the new regime at Lammershoek would move away from the ideals of naturalness and freshness which characterise the best wines made in the area for the last decade-and-a-half. But, I’m very happy to say, emphatically, not. The farming will continue to be basically organic, the winemaking oriented to non-intervention. On the other hand, I’m confident the problems that had occasionally arisen with regard to reliability and the consistent health of some wines are a thing of the past. 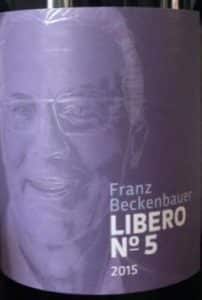 Perhaps that’s why Franz Beckenbauer is now happy to have his fame made use of by Lammershoek. The Libero No 5 is a fine wine: based on syrah (77%), it includes carignan and grenache, co-fermented with just a little viognier and (most unusually) chenin, and aged in larger old oak (Price: R420 a bottle). I reckon it’s got a good future, but I have an awful feeling that I might not have the willpower to let it reach maturity, so freshly, pure-fruitedly drinkable is it now.