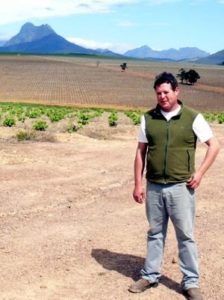 Janno Briers Louw is a hopeful young man – as farmers go. He talks of the problems of this dry vintage and regrets the loss of some old vineyards on the family farm Eenzaamheid, but sniffs the onset of seasonal rain (winter is in the air, he says!), and is excited “about what these soils will have to offer in the distant future should we decide to replant with vines”.

Eenzaamheid is a large and prosperous mixed farm on that wide tract of land between Paarl Mountain and the Paardeberg, and Janno and his dad Christo (sixth and seventh generations here, though the boundaries of this place called Solitude have stretched and shifted over the centuries) manage it with great professionalism.

That implies allowing only so much sentimentality, and Janno, who’s been diverting grapes from Perdeberg Winery since 2010 for his own label, sees the necessity for uprooting uneconomically viable vineyards. That includes “five vineyard blocks which were planted by my grandfather in the 1980s”. “It’s sad”, he emailed me recently, “to see these old vine beauties meet the brute force of agricultural machinery”.

The drought is clearly being something of a turning point for many dryland winegrape farmers. “It was a very challenging vintage in terms of vinification”, Janno says, “but the biggest challenge for us and many other dryland growers will be to survive financially after this dry vintage where some farmers saw decreases of up to 75% on their average annual yields.” All his neighbours, he reckons, are abandoning a vineyard or two, and he told me of a famer near Malmesbury who was now giving up viticulture entirely, ripping out well over 100 hectares of vines to plant wheat.

These are not isolated moves, and I’m pretty sure that the trend of declining vineyard area in South Africa over the past decade or so will accelerate now; the profitability of winegrape-growing is tenuous enough for many farmers – especially in the less fashionable and in the dryland areas – and drought just makes it worse. Of course, this is not necessarily a bad thing: arguably there’s too much lower-end wine being produced, anyway, and not enough wheat…. Even the uprooted old vineyards on Eenzaamheid were nothing special, says Janno. He hopes to plant Rhône grapes and high quality varieties more suited to dryland farming in warm dry areas.

Meanwhile, the Eenzaamheid label is forging ahead successfully in its own smallish way. The reds have always been vinified in converted shed-space on the farm, and now the whites will be too, as Perdeberg Winery has declined to continue having them vinified there. That’ll mean more work for Janno, but I reckon it’s a good thing.

This last week he showed me two wines he’ll be launching in six weeks or so – and really, you should look forward to that, as they’re predictably fine wines at the usual good prices. The old-oak-matured Chenin Blanc 2014 (around R120) is a touch lighter than the quite rich 2013 (which got five stars in Platter last year, and is drinking beautifully now), but not in the least problematically so – I rather like the fresh refinement, and there’s still plenty of ripe tropical complexity and a good balance.

Just as unpretentious and just as thoroughly drinkable is the Cinsaut (R90) – less fruitily showy than some, though with winning rose-petal notes added to the bright red fruit, elegantly proportioned with 12.5% alcohol and a pleasant tannic grip, fresh and delicious. I must say I prefer it to Waterkloof’s Seriously Cool version which has been getting rave reviews recently.

You’ll have to wait for those two, but I’m more than confident in recommending another Eenzaamheid wine which has been out for some months already and which I tasted last week for the first time: the Vin Blanc 2015, a maiden white blend. It’s a companion to the Cuvée red blend – sharing its brilliant price (around R65) and great charm. The Vin Blanc is more than half chenin, with clairette, semillon and viognier; it’s fruity and fresh, beautifully assembled and hard to match, I think, for value. Viva dryland vines. Long indeed may they thrive.

More from Tim James on the different levels of the local wine industry here.