Tim James: On the magic mountain that is Skurfberg

There are many wine-growing mountains in the Cape winelands, with the best-known names from Stellenbosch: Helderberg, Simonsberg and, perhaps, Schapenberg. All have something distinctive to say, unless muted by overripe fruit and heavy-handed winemaking, although the language of our landscapes is one that we are continually learning to better comprehend. As for other mountains, the last decade has seen, for example, the Paardeberg make its own claim to fame, as the home of the Swartland revolution.

Another great bit of mountain terroir is farther distant from the old heartland of Cape wine and known to a comparatively small – but growing – group of cognoscenti. 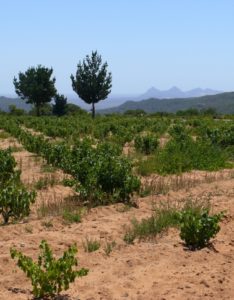 The Skurfberg is a rather scruffy outcrop between Clanwilliam and the Atlantic, in the Citrusdal Mountain ward of the Olifants River region. A decade back the serious winelover could not have expected much from the area: anyone knowing of these dryland vineyards (despite very low rainfall) would also have known that their produce disappeared into the huge blending vats of the Klawer co-op, along with altogether less promising grapes off copiously irrigated, mass-cropping vines on the valley floor.

But the great forward march of South African wine was implacably underway. Cometh the hour, cometh the viticulturist. Cometh Rosa Kruger, seeking out old vineyards for her then employer, Anthonij Rupert Wines. Rosa was also working with Eben Sadie, and it was two wines in his Old Vineyards Series – Skurfberg (from a mountain-wide vineyard blend of chenin blanc) and Kokerboom (single-vineyard semillon) – which first alerted the world to the magic of the mountain.

Now an extraordinary handful of wines is being made from the vineyards of the three Skurfberg wine farms, Trekpoort, Arbeidsend, and Oudam. There’s Botanica Mary Delaney Chenin Blanc from American expatriate Ginny Poval; Rupert’s Cape of Good Hope label carries two vines whose names honour the farmers who have tended their old vines so well over the years and are now at least reaping richer reward for it, getting vastly higher prices for their grapes than before: Laing Semillon, and Van Lill & Visser Chenin Blanc.

Chris and Suzaan Alheit used Skurfberg chenin for their Cartology blend, and then from 2013 also made the brilliant single-vineyard Magnetic North Mountain Makstok. The latest examples of Skurfberg-in-a-bottle comes from Thinus Krüger’s new Fram Wines: an excellent Chenin Blanc (this year joining the many other Skurfberg wines that have won five Platter stars) and a Pinotage – the first red amongst the new wave of Skurfberg wines.

So what’s so special about these slopes? It’s a combination of factors, says Rosa Kruger, including older vines (35-years-plus-plus); modest yields, proximity to the sea and high altitudes meaning cooler nights after the hot days of summer; deep red sandy soils with a layer of clay beneath. Above all, maybe, vineyards in balance.

The Skurfberg wines tell as well as any, and better than most, the essential story of the highest achievements of the last decade of Cape wine-growing: a determination to seek out fine vineyards, manage the vines with minimal intervention and make the wines with an equally light hand, so that “somewhereness” can be revealed.

Bacchus loves a hill, said the ancient Romans. I reckon a bibulous god, venturing this far south from old Europe, would have been happy to get tipsy with the wine off this rough, sunny berg.

Grapes from a 1957 vineyard on Citrusdal Mountain, this Chenin Blanc as made by Ginny Povall is an essential purchase every year for connoisseurs of the variety. The 2020, spontaneously...

Cape of Good Hope is part of the Anthonij Rupert portfolio of wines, grapes for this white blend from the Riebeeksrivier property on the slopes of the Kasteelberg, neighbours including...

The Cape of Good Hope Van Lill & Visser Chenin Blanc is the Skurfberg offering from Anthonij Rupert Wyne, both Basie van Lill of Arbeidsend and Jozua Visser of Oudam...