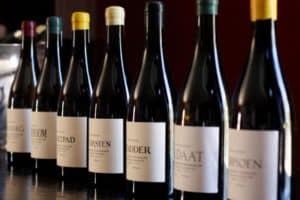 In all their splendour.

“2017 comes with much turmoil”, Eben Sadie announced at his latest trade tasting release. (I wrote here about the 2016 Columella and Palladius simultaneously released.) A year ago, he was downright pessimistic about the 2017 vintage. He’d been forced to picked the grapes, in many cases, earlier than he would have wished in order to achieve freshness. As the wines matured, however, he became less concerned. Although I know him to be rigorously honest, I did wonder if this was a bit of wishful thinking (if not quite the same as when the Bordeaux publicity machine is reluctant not to declare each vintage the best ever). So I was relieved to taste through the range of the Old Vines Series 2017 and discover some really splendid wines – definitely no duds; a few I thought superior to the 2016s, a few perhaps for earlier drinking; all of them fit to be part of the range of the Cape’s leading producer.

Quantities are generally down, however – some severely so – and there are going to be some cries of anguish, as even those who normally get allocations directly from the winery are not getting what they have before. Some wines will be very hard to get.

Eben’s own formal assessment of the vintage is worth quoting. You will see that it is not full of hype:

“Our initial feelings and observations of the 2017 harvest were that the grapes definitely came in with much lower levels of ripeness and acidity; and in general we were of the view that the wines would have a more limited longevity than usual: the new equilibrium suggested simpler wines with a lesser inner core structure and weight. And yet, as the 2017 vintage continued ageing in the casks, clay and concrete vats it became evident that the wines were punching way above their weight. In general the alcohol levels are a level lower than before by around 0.5%. It is only in the very northern territories of the Olifantsrivier where the usual level of ripeness of the grapes was maintained, but in the Swartland there was a definite reduction. The acidities are lower and again on average by 0.5 grams per litre; and it actually makes for earlier drinkability on the 2017 wines, not being a bad thing at all as many of the other vintages prior to 2017 need to stay under cork for a significant period of time.”

Here are some brief notes on the 2017 wines, based on one tasting of the wines – not hurried, but not as leisurely as I would have ideally liked. In the order tasted.

Soldaat: “Grenache can be many things”, as Eben pointed out. His is always one of the more serious examples. The wine was rather reduced, but had a lovely perfume, not simple, and with earthy undertones to the red fruit. Very bright overall, with hints of a darker complexity. Notably dry, with balanced firm tannins. Less fruit concentration than usual, I thought, suggesting an earlier-drinking deliciousness (not without an austere element), though I’m sure it will develop well for a few years.

Pofadder: While I had thought the 2016 to be a touch weakened by fairly early picking, I thought this really lovely and successful (more so than Soldaat). It’s always one of the Cape’s most serious-minded cinsauts and this no exception. Real finesse and freshness, the acid beautifully poised. Nervy and energetic. Fine tannic texture and grip, enough to ensure future development (five years at least?).

Treinspoor: Some people always greatly admire this tinta barocca, and Eben has always been especially enthusiastic about it as expressive of Swartland terroir. I never have, though I’ve liked it more each year as it has (in my opinion) gained in finesse and its implacable tannin has been better and better managed. This vintage I do admire, with its dark, brooding quality, its intensity, promising complexity to come. I still think that there’s probably more skeleton than flesh, and a touch of unnecessary sweetness, but maybe ten years in bottle will prove me wrong.

Skerpioen: This West Coast chenin-palomino has always been a favourite wine of mine, and the 2017 does have the characteristic saline, mineral quality. It was picked very early to keep a good acid, but it’s actually comparatively easygoing and, I think, for elegant drinking anytime from now for (I’m guessing) five or so years max. There’s less concentration than usual.

Skurfberg: This is an interesting vintage of this blend of three (properly ripe) vineyards from Citrusdal Mountain. More austere than usual, notably mineral. A grand wine, needing time to gain flesh. The dried apricotty, stonefruit character is there, but not (yet) deliciously so. Of all the wines, I suspect this most needs a period of grace.

Kokerboom: This blend of Skurfberg red and white semillon is one of those in particularly short supply this vintage – unfortunately, as it’s a marvellous wine. I didn’t much care for the ripe opulence of the 2016, but here an opulent element is perfectly balanced with brilliant acidity, an element of tannic grip, and an intense spicy, herbal fruitiness, to give a delightful vibrancy. 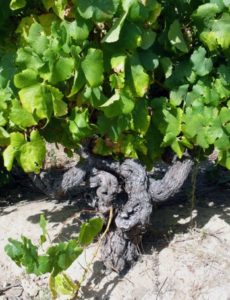 One of the old ‘T Voetpad vines.

‘T Voetpad: From that old mixed north-Swartland vineyard, also a great success in 2017, despite it always being particularly hot there. Complex, intense and deepfruited, good acidity and superb balance, and long-lingering flavours. Always one of my favourite Sadie wines, not only because of the magic of the vineyard, and this year no exception.

Mev Kirsten: A splendid and elegant vintage of this Stellenbosch chenin, from mostly very old vines. There’s richness and mineral finesse, there’s charm and sheer loveliness, and an extraordinary quality of early complexity. Adds to any reason I might want to be alive in ten years’ time – provided I still have a bottle of this to drink.