Tim James: The language(s) of labels

Following my piece some months ago about accuracy in what labels say about alcohol levels, I had an email from Peter May (the great pinotage aficianado) asking what I could say about local rules about the language to be used on South African wine labels. He mentions a post on a UK wine forum, which says: “I’ve just taken delivery of a bottle of Patatsfontein Chenin Blanc 2016 from Montagu. The labelling is apparently in Afrikaans. Is this common in South Africa?” He adds that a later post suggests that the facts of SA having 11 official languages in RSA and Zulu and Xhosa speakers outnumbering Afrikaans ones should have some consequences.

I’ve written before welcoming the proliferation of Afrikaans names on wine labels, and pointed out that a good few producers are now labelling only in Afrikaans – Hermanuspietersfontein surely the pioneer in modern times, with Sadie’s Ouwingerdreeks possibly second. 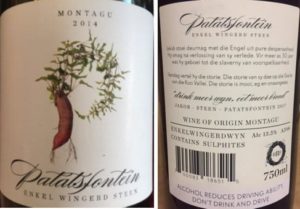 Patastfontein “front” and “back” labels.

Rather shamefully, however, I forgot about the issue until I was reminded of Peter’s question when I received an announcement of the latest releases of Reenen Borman’s lovely Patatsfontein Enkel Wingered Steen (single vineyard steen/chenin blanc) and the Patatsblanc – ’n versnit wit (a white blend).

We can learn much from these labels. The bits I’ve already quoted appear on what we tend to call the front label but which the authorities regard as less important than the “back label” – which carries the compulsory information. As you can see from the photos of the Patatsfontein labels, the information-carrying label mixes Afrikaans and English, with the latter used to declare the Wine of Origin area, the sulphite warning, the alcohol level (“alc.”), and the health warning.

Now, there is in fact no need to bring in English at all for the local market – all-Afrikaans would be just fine. I’ve seen the official regulation for the health warning, and it says that it can be in any of the 11 official languages – but “must be in the same language as that of the container label”. And that language in this case would be deemed to be English, even though English is in a minority – because English is the language used for the compulsory info about origin, alcohol, and sulphites (the other bit of statutory information concerns volume, but “ml” serves both languages).

I have searched the regulations for guidance regarding the use of all the official languages for compulsory info on wine labels generally, but have only found English and Afrikaans versions referred to. I sent an email to SAWIS asking about this, but the matter has been referred to the Wine and Spirit Board and I look forward to a response. My reasoned guess is that they would be obliged to accept statutory label info in all the languages, but that this hasn’t been tested, and the legislation has not been formally updated (except in the case of health warning, which post-dates 1994). Incidentally, I googled for images of sorghum beer containers (directed primarily at the black market) and many of them seem to make use of English, the lingua franca.

The question that remains is why Patasfontein brings in English at all. There’s clearly not much concern at a buyer in London or Dublin not understanding Afrikaans: the little story on the “back-label” is not translated, and even “enkelwingerdwyn” is not translated.

Undoubtedly, the answer lies in European Union legislation, rather than South African. That requires the compulsory or certain optional info to appear in any one or more of the official languages of the EU – of which English is one. Allergens warnings, however, must appear in the majority language of the country in which the wine is sold – which explains why we often see labels bearing the sulphite notice in half a dozen or more languages (so the Patatsfontein label would have to be amended if the wine was being sold in European countries other than English-speaking ones).

I hope I’ve answered Peter May’s questions satisfactorily. I’ve learnt a lot myself, so I’m grateful for them. But I was led by the European stuff to wonder what will happen after Brexit. In fact, English is indeed registered as the official language of only the UK; Ireland and Malta, the other English-speaking members, nominated their native languages as English was already there, as it were. It looks unlikely, however, that English would disappear from the official list, given its importance – if you want to read more on the issue, see here.