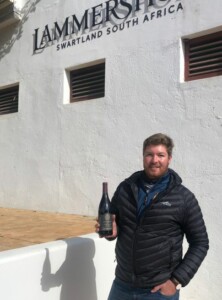 The winemaker of Lammershoek, Jorrie du Plessis, and I went scrabbling in the storage space beneath the cellar, hoping to find a bottle that I’d only heard about. It was impossible to stand upright, and Jorrie pointed out to me that we were right beneath the massive weight of the old cement tanks. But,  at last, in an unassuming cardboard box we found just one bottle of Lammershoek Varia Barrique 1999.

It’s a significant wine in the modern history of the Paardeberg – the granitic Swartland mountain near Malmesbury (named for the once-abundant zebra species hunted to extinction by the early settlers) that has been for nearly 25 years at the centre of the winemaking that revolutionised the Swartland, and was thus pretty crucial to the whole Cape wine revolution this century.

From about 1998, Spice Route’s young winemaker, Eben Sadie, was exploring the farms on the mountain, looking for good grapes for his new tanks. He was shortly to start making his own wine in an old shed on Lammershoek, and later to buy a small portion of the farm and then build a winery, plant vineyards, expand his holdings etc, etc. I’ll get to the latest Sadie happenings on the Paardeberg in another episode of this visit-report. Back first to Lammershoek, which was, at the end of the 20th century, soon going to be a source of grapes not only for Spice Route and Fairview but also for Sadie Family Wines – and thereafter a number of wineries eager to join in the rediscovery of the Swartland’s potential.

It was a crucial moment in the Paardeberg’s modern history when the Lammershoek estate was bought by Paul and Anna Kretzel, and  a partner back home in Germany. The cellar hadn’t been used for ages, and in fact all the grapes grown on the Paardeberg went to co-ops for vinification until a few were diverted to the pioneering Spice Route cellar and the tender mercies of Sadie winemaking. The Kretzels, with a vision of what was possible here, were also determined to change things.

The cellar (it goes back to the mid 1800s) was expanded and renovated, and visiting Austrian winemaker Markus Huber made a number of wines from the 2000 vintage. (Sean Turnbull came in full-time thereafter, succeeded by Albert Ahrens in 2002.) Those 2000s and some 2001s were the first wines featured in Platter’s (2002 edition), and until recently I’d never heard of anything earlier.

But there, in that old cardboard box, was the bottle of Lammershoek Varia Barrique 1999 – the first commercial Paardeberg wine to have been made and bottled on the mountain in modern times. Wine of Origin Coastal Region, unfortunately, rather than Swartland, but still. It was, however, an impeccably authentic forerunner of what was to become established as the typical “Swartland blend”: 75% shiraz, 20% carignan, 5% pinotage, with a declared 14% alcohol.

Since then, Lammershoek has been quite unlucky – with some of the bad luck being, arguably, ownership mistakes. It’s not the time to re-tell the story of instability in winemaking and viticulture. I mentioned some of it in an article last year, which celebrated how things have in recent years been looking extremely promising again, with a newly consolidated ownership and a fine winemaking and viticultural team. Owners Andreas and Sonja Abold poured capital and passion into the project – not the least notable of their efforts was a major upliftment in the condition of the workers’ housing on the farm. There have been excellent wines once again emerging from the cellar.

Bad luck continues, sadly. The Abolds have been obliged for personal reasons to seek a buyer for Lammershoek. Hopefully this will shortly be successful, and the depleted staff complement can be rebuilt. At present, Jorrie du Plessis, who took the cellarmaster slot after having been winemaker, is in charge of just about everything on the farm, from vineyards to winemaking to marketing.

I tasted a few of the current wines with Jorrie. The whole range is interesting at least and first-class at best, with the Chenin Blanc Reserve and Blanc blend particularly fine. But Die Harde Blaar in the Mysteries range is particularly fascinating. It’s made from hárslevelű, the Hungarian grape that’s very rare in South Africa. It’s always made a fine wine at Lammershoek – whether as as a Straw Wine in the earliest years, as an ultra-light “natural” wine in the hands of Craig Hawkins, or as in this fresh, still-light but substantial version (a little skin contact adding some impression of weight).

Jorrie in fact added some hárslevelű to the chenin blanc that dominates his Mysteries Straw Wine, when he revived this tradition in 2020. It’s a gorgeous, intense wine, in 500 ml bottles, fresh, with just 180 g/l of sugar; a little sultana, more marmalade and citric freshness. Another comparative rarity is Die Ou Man, also in the Mysteries range, made from 1969-planted tinta barocca. They’re about to move on to the 2017 vintage, and that’s worth looking out for, as there’s more fruit depth, I felt, than in the 2016, to accompany the strength of tannin that is expected from the variety. It’s a touch formidable, but entirely delicious.

As for Varia Barrique 1999, we didn’t broach that unique bottle, of course. After Jorrie posed with it for me in the winter sunshine it went back, I imagine, to its dark cellar – though, I trust, now more respectfully placed than in that tatty cardboard box.

I remember a wine conversation with my brother, many years ago, in which he commented that he couldn’t afford to buy the sort of wine I did. At the time,...