Where does SA fit in the American market?

The USA is the world’s largest wine consuming nation so understanding the complexities of this market is important for a local producer-wholesaler like Distell. Yesterday, Niel Bester, winemaker at Plaisir de Merle, the Paarl property owned by Distell, hosted a tasting featuring his wines up against US counterparts picked by the Distell’s US agent Terlato Wine Group as representing direct competition. Also in the line-up were some of South Africa’s most highly regarded wines plus some French and Australian benchmarks at the price points in question. 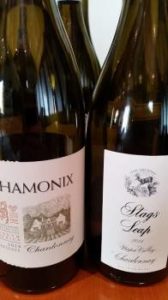 First a flight of 15 examples of Chardonnay were I had Chamonix Reserve 2014 tied with Stag’s Leap Napa Valley 2014 as my two top wines and Paul Cluver Seven Flags 2014 and Sonoma-Cutrer Sonoma Coast 2013 just behind. What was a bit disconcerting was that South Africa’s very best was not hugely better than wines that sell for around $25 a bottle in the US, which is to say not entry level but not the very top-end either. On a more positive note, these wines were stylistically quite close together, from which we can assume South African Chardonnay is not going to struggle to find favour among consumers in the US.

It’s when we tasted a flight of Cabernet Sauvignon followed by red blends that things got perplexing. My top two wine in the Cab flight were Kleine Zalze Vineyard Selection 2012 (5 Stars in Platter’s 2016) and Le Riche Reserve 2013, both of which I liked for their depth of fruit, balance and the overall savoury impression that they made while the Ormes de Pez 2011, Saint-Estèphe Cru Bourgeois , was also pretty smart. The US wines which sold for around $35 a bottle (including the likes of Markham 2012, Rutherford Hill 2012 and Mount Veeder 2012) tended to be much easier in style – more red than black fruit, plenty of oak-derived aromatics and flavours, soft and smooth.

Stylistic differences became even more marked in the case of the blends. Here my wine of the flight was the Rust en Vrede Estate 2012, which despite its alcohol of 15.07%, appeared classical in the sense of being savoury and tannic in relation to what was on offer from the US – the Justin Isoceles 2012 from Paso Robles and the Orin Swift Cellars Papillon Red 2012 from Napa Valley (both around $70 a bottle) were borderline undrinkable for me on account of the dead-fruit profile they presented.

Also in the line-up was the 2012 from Rauzan-Segla, the Margaux Second Growth, which was typically Bordeaux being slightly angular but very youthful and not far behind the Rust en Vrede for me. It goes for around $65 a bottle in the US and presumably doesn’t struggle to sell. The question for the likes of Plaisir de Merle then becomes: Do you take your cue from Napa Valley and the rest of California or Bordeaux when it comes to trying to make it in the US?

After 45 years of corporate ownership by producer-wholesaler Distell, the Simonsberg-Paarl property Plaisir de Merle has been sold to the Jordaan family of Bartinney Wine Estate in the neighbouring Banhoek...