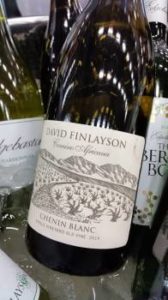 On the right track.

SA’s second oldest block of Chenin Blanc was planted in 1947 on Kaapzicht in Stellenbosch, and now supplies grapes for two wines, the first being Kaapzicht’s own called The 1947 and the second being the Camino Africana.

While the 2013 vintage of Camino Africana was imposing but somehow unresolved, the recently released 2014 (R300 a bottle) is altogether more convincing. Finlayson picked early in 2013 and even earlier in 2014– the final wine has an abv of just 12.5%, a degree lower than the previous year. Fermentation occurred spontaneously and the wine was matured in barrel, one 300 litres in size and the other 400 litres, both new.

It shows white and yellow peach plus some yeasty complexity. The palate is rich but balanced with nicely coated acidity, initially the mouthfeel quite oily but the finish very dry. It’s right and true like the best wines from this winemaker always are.

“Specially bottled to celebrate a remarkable vintage for red wine” reads the front label of this special release Cabernet Franc 2017 from Stellenbosch property Kaapzicht and we should all be...