Skylark is the label of lawyer Adrian Dommisse, first release being a Cinsault 2014 which he made with the assistance of Chris Alheit of Alheit Vineyards, prompting Alheit to make his own version under the Flotsam & Jetsam label the following year. 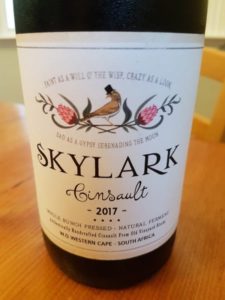 It has a relatively complex nose of red fruit, candy floss, earth and spice. The palate, meanwhile, is seemingly quite rich and broad despite a moderate alcohol of 12%. Unpresuming and all the more likeable as a result. Wine Cellar price: R150 a bottle.

“These are potentially some of the best winelands in the Cape”, says winemaker Chris Alheit about Ceres, that high-lying inland plateau better known for deciduous fruit, especially apples and pears....

It’s a long drive from Cape Town to get to Basie van Lill’s Skurfberg farm, Arbeidseind – but not a tedious one when Eben Sadie is there doing the driving...

One of my favourite bits of wine ephemera is a fading and well-worn beige T-shirt with a picture of a bunch of grapes on the front and the words “The...