It’s a long drive from Cape Town to get to Basie van Lill’s Skurfberg farm, Arbeidseind – but not a tedious one when Eben Sadie is there doing the driving … and a lot of the talking. It means a 6.30am start from Malmesbury, up the N7 with all its roadworks, turn-off at Clanwilliam onto gravel in the direction of the Atlantic, then soon bumping and climbing the mild peak to Arbeidseind. But each time I’m there, I think that this is perhaps my favourite wine farm of all. 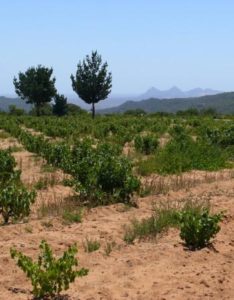 From the highest vineyard (red sandy soil, gnarled chenin bushvines, with adjacent dark pines set against the sky), from which Eben takes grapes for his Skurfberg blend, are fine views in almost all directions: to distant mountains, to other vineyards of the area. It’s not the rich, imposing loveliness of, say, Rustenberg in Stellenbosch (and Basie’s modest farmhouse is a far cry from a Cape Dutch manorhouse), but it is wide and open, and with its own harsher grandeur and beauty. And the vines are marvellously cared for – Eben never fails to remark on what a good farmer Basie is.

Sadie is not the only person depriving Klaver Wine Cellars of the fruit of the old vineyards which viticulturist Rosa Kruger “discovered” nearly a decade back, when she was employed by Anthonij Rupert Wines. Rupert takes some for their Van Lill and Visser Chenin Blanc, and the Alheits have an own-roots vineyard (just down the slope from Eben’s, slightly less picturesquely sited but still giving the vines a good outlook) which produces their magnificent Magnetic North Mountain Makstok. Incidentally, while there I sent Chris Alheit a photo of “his” flourishing and recently suckered vineyard, and he replied saying he’s travelling north to see them himself next week. Winemakers like Chris and Eben cover an awful lot of kilometres to care for their vines. 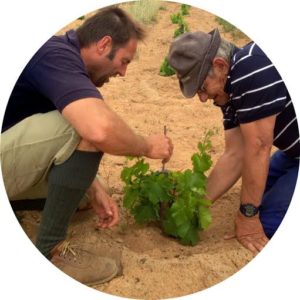 These vineyards I’d seen on previous visits, but there’s also a new one which Basie and Eben have planted: a hectare of grenache noir. (The photo shows them hunkering down to discuss management of the young stock.) It’s one of a few plantings in the Cape of the first release of some excellent new grenache vine material, and Eben is clearly excited about its prospects. “Supervines” he calls these virus-free, totally clean vines.

So there they are, vigorously youthful in the red sandy soil of Arbeidseind, under the care of one of the Cape’s great wine visionaries and one of the Cape’s most meticulous, painstaking farmers. One day I hope to taste the vinified fruit: grenache expressing the Skurfberg soil and sun – and, I must believe, the view and the atmosphere. And one day other winelovers, when I’ve long since ceased visiting Arbeidseind and drinking its wines with pleasure, will see if Eben was right in thinking that old Skurfberg grenache should be as exciting as old Skurfberg chenin and semillon.

One of the most exciting aspects of the most progressive parts of Cape wine today is that it’s confidently about the future as well as the present – with the past voicing its opinion too.