Dax Villanueva: Morgenster and the development of the SA olive industry 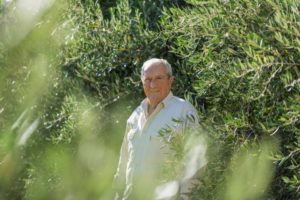 Giulio Bertrand is well known in the wine industry for the excellent wines produced by his Somerset West wine estate Morgenster . But many people do not know that in 2012 the SA Olive Industry Association nominated Bertrand for a Lifetime Achiever Award in recognition of his contribution to the development of South Africa’s olive industry. Bertrand is in fact considered by many to be the father of the SA olive industry as we know it today.

Giulio Bertrand was born in Biella, an important wool processing and textile centre in North West Piedmont in Italy. He was involved in the family business in the textile industry, and he owned factories in South Africa and the United States as well as in Piedmont and Tuscany in Italy.

From 1975 Bertrand started coming to South Africa four times a year to oversee his two factories in the Eastern Cape. As his love for the country grew, he decided after his retirement to spend two months each year in the Western Cape to escape the Italian winter. But a man like Bertrand does not retire easily.

Bertrand saw the limited availability of olive oil in the early 1990s as an opportunity and he formulated a plan to make Italian style olive oil at Morgenster, using Italian olive varieties. Giulio imported 17 varieties of olive trees from various parts of Italy, and soon Morgenster had 50 hectares of olive groves.

The first Morgenster olive oil was marketed in 1998 and was a resounding success. Seeing the opportunity, Bertrand was approached by others wishing to acquire these Italian olive varieties. Morgenster sold 1.1 million trees between 1997 and 2014, nearly half of the 5000 hectares planted for oil production by 2014.

Over the years Morgenster has consistently produced top quality olive oils which are some of the most internationally awarded oils produced in South Africa and the brand is recognised globally as a producer of high quality olive oils. In this way Morgenster continues to lead by example and push the SA olive industry to greater heights.

• Dax Villanueva is founder of lifestyle blog Relax with Dax and is also involved in Olive Central, a promotional initiative for the SA olive and olive oil industry.