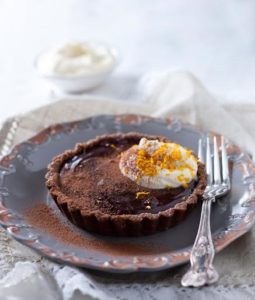 Melt the chocolate and 250ml cream in a bowl over a pot of simmering water. (Don’t let the bowl touch the water). Remove immediately and stir in the vanilla paste and leave to cool for 5 – 10 minutes. Spoon into the tart bases and chill for at least 2 hours.

Just before serving, remove the tarts from the fridge and carefully release them from the tart tins. Whip the remaining cream until soft peaks form then fold in the zest. Serve the orange cream with the chocolate tarts and dust with cocoa powder.

Wine pairing:
The sweetness and richness of this dish does not allow for a dessert wine which is too light in style. A Noble Late Harvest with some age might work but better to opt for a red Muscadel, a Cape Tawny or even a brandy.