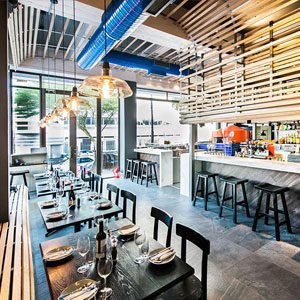 The zucchini fries at Bocca are unmissable. They are cut like skinny chips, but tend to flop modestly. This is not a starchy, upright chip – all brisk posture and uniform texture. With their melting centres and tempura-type coating, these veggie fries offer light crunch and a fresh but velvety filling.

The accompanying herb mayonnaise is a happy match: creamy but green, it underlines the deviation from classic frites and mayo to something more earthy.

The baby marrow fries – like all the small plates on Bocca’s menu – are not intended as a main or a side. They’re not tapas either, the waiter tells us. The small plates should be ordered in combination, for sharing, as a meal.

On the waiter’s advice, we ordered everything under the heading “Fingers”: the fries; the meatballs; the arancini; and the pork belly ribs.

I loved the fries and the tomato-based marinara sauce for the lamb meatballs (this dish is served with a little piadina bread to allow you to eat it with your hands). I liked the combination of the pork with a chilli and basil dipping sauce. I found the cheese-stuffed arancini with aioli a little heavy.

We also ordered a pizza. You can’t not order a pizza at Bocca.

The crazy-hot pizza oven is imported from Naples. The crust is elastic with burnt spots called “leoparding”. Owner Neil Grant and chef Annemarie Steenkamp take pizza very seriously. They have been serving these Neopolitan-style pizzas at Burrata at The Old Biscuit Mill for years.

The sunshiney taste of the tomato sauce on the pizza was one of my favourite things about the meal.

I could have done with more sunshine at Bocca. There is something about this restaurant that lacks heart.

I was hoping to eat at a more laid-back version of Burrata, a place full of people sharing small plates of food – licking their fingers, pointing and “mmn!”-ing at the plate they just tried, the table littered with half glasses and wine and cold beer bottles in the pink sunset light. I wanted it to spill onto the city street. I wanted to share a table with strangers. I wanted to see the famous pizza oven, sure, but I also wanted to see boxes of tomatoes, boxes of zucchini and bags of flour – or at least to get a sense of them. I wanted there to be a home-meets-bar-meets-market vibe.

That’s not the vibe at Bocca. This is a casual restaurant that takes itself rather seriously. Despite the fact that the menu advises us to share and despite the fact that we’re given our own pizza slice so we aren’t restricted to eighths, the focus is not on happy days. The focus is on the food and the décor.

On its website, Bocca says its aim is to serve “Neopolitan pizza and Italian-inspired food in an informal, contemporary space in the centre of Cape Town”.

It’s more self-consciously “contemporary” than it is genuinely informal. The surfaces inside are clean and hard. There’s a lot of slatting around the place. Bocca is written in a way that could be mistaken for a sports car logo. The photos on Bocca’s website don’t have a single human in them, just beauty shots of the décor. The restaurant palette is navy with flashes of white and red. Navy? Where’s the soil in that? Where’s the kitchen table? And if not the soil or kitchen table, where’s the city street?

It’s a shame that Bocca has styled itself as a shrine to food excellence. Its location could do with some mix-it-up energy from hipster patrons: Bocca is in a gentrification transition zone, just spitting distance from the Bo Kaap.

We walked up Wale Street in the dark after supper. There were lights on and people inside the corner caffie next to Rocksole shoe repairs. Through the windows we could see a group of men, talking loudly, gesticulating and laughing. The light was warm and so were their voices. I wish they’d been at Bocca.

On a dark night in early June, during loadshedding, a friend and I were accommodated at Open Door without a booking. I doubt we’ll be so lucky again. Open Door...

At the risk of sounding like a Dale-Roberts groupie, I’d call the meal I ate at The Pot Luck Club faultless. Every dish was unique and every aspect of every...

On the occasion of my daughter’s tenth birthday I suggested we go out for “the best pizza you’ve ever tasted”. Burrata at the Old Biscuit Mill is determinedly unpretentious. There’s...