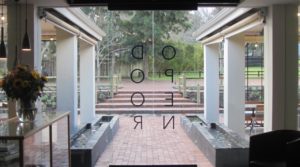 On a dark night in early June, during loadshedding, a friend and I were accommodated at Open Door without a booking. I doubt we’ll be so lucky again.

Open Door had only been open a matter of days when we visited. Word is sure to have got out by now about Neil Grant, Barry Engelbrecht and Annemarie Steenkamp’s new restaurant at Constantia Uitsig. This is the team that’s famous for gourmet pizzas at Burrata and trendy sharing plates at Bocca.

It’s all quite grown-up. The main restaurant area, with its central, Art Deco-style bar and navy banquettes is the interior design equivalent of a well-cut jacket and jeans.

This historic venue used to house The River Café, a favourite brunch spot in Constantia. The new walkway and hall are not only grander than the old River Café entrance, they make better sense spatially.

At the centre of it all is Grant’s wine cellar – the physical expression of his primary passion. Grant’s wine knowledge and his unstuffy approach to wine pairing is an attraction here, as it is at all his restaurants.

How about this for unexpected? Matteo Guidone, Open Door’s operations manager, persuaded us to try one of Grant’s merlots with our lamb neck main. We weren’t an easy sell. Guidone indulged our prejudice, offering us tastes of other varietals, including a Paul Cluver Village Pinot Noir (2013). We settled on his original recommendation, the Waterlily Merlot (2012) from Bloemendal, Durbanville.

The menu is decisively short. We started with a steak tartare that spoke to Steenkamp’s sophistication. Steak tartare can be a self-conscious dish. This one didn’t rise in a moulded shape or cover the table with sides. Instead, the butter-soft meat was topped with a quail’s egg so soft it was merely sheathed in white. Kimchi pickle squares, dots of black bean hummus and crispy Brussels sprout leaves ringed the plate.

The kimchi was cut with precision – it reminded me of the satisfyingly perfect cubes of beetroot in the orange and beetroot salad at Burrata. The kimchi was more-ish but cut so thoughtfully it was unable to overpower the flavour and textures of meat and egg. The sprouts added crunch and nuttiness; the black bean hummus was all about the bass notes.

My friend’s favourite course was the lamb neck with garlic, Jerusalem artichoke, baby carrots and gravy. The slow-cooked neck was deboned and trimmed of fat, presented in a round. Whole carrots, in a range of citrus shades, nudged up against the gravy.

This was the fantasy Sunday roast plate, with every element expertly cooked. The flavor of the meat was concentrated; the texture comfortingly buttery but without visible fat. The artichoke and garlic recalled slow-cooked lamb of the Mediterranean. In my opinion, this dish represented the “safe” section of the menu – safe, but not boring.

My favourite course was dessert because it was so out-there – and so successful. It jumped out at me from the menu: buttermilk mousse with lime parfait, coriander emulsion and rye crumble.

Buttermilk always draws my attention on a menu, both because of its firm place in the South African comfort-food lexicon and because of its potential to dominate a dish. I wondered how Steenkamp would work with its strong taste and evocative potential. This is an ingredient that likes to be centre-stage, a bit like those bossy aunties who use it in their famous rusks.

This was such a clever dish. Of course, lime, coriander and rye are no shrinking violets when it comes to taste. They are some of the most pushy and distinctive flavours around. This is how it all came together: the heaviness was whipped out of the buttermilk in the mousse; the lime kept its sunny sourness but lost its sting in the cold parfait; and the coriander brought the two together with grassiness and a hint of exotic climes. The rye crumble almost made me laugh. It sat at the bottom of the bowl like breakfast cereal waiting for milk. In fact, it was genius. The dry, almost smoky crunch was just what was needed to deal with the big-ego ingredients. None of the elements was overly sweet, something I appreciate in a dessert. Instead of sugar, the theme was play.

My friend’s guava dessert was magical in a different way. It was neatly contained. The plating was so understated as to be a surprise: A simple glass jar containing layers of aniseed panna cotta, guava and fennel compote, poached guava, and almond crumbs. The glass jar was a preserving jar, a most fitting allusion to farm preserves and winter crumbles.

Guava is similar to buttermilk: these are the most forceful of South African aunties with uncompromising, sometimes difficult-to-take flavour. They have another thing in common: if guava and buttermilk are put at their ease, it’s possible to charm sweetness, gentleness and warmth from them.

It turns out Steenkamp is the ultimate guava charmer. With the smoothness of the panna cotta and the ever-so-light tastes of liquorice from the aniseed and fennel, the guava was subdued. Aunty Guava settled into the spotlight as a plump, blushingly content hero ingredient.

After dinner Guidone brought my friend a complimentary chilled glass of dessert wine. The wine was served in a period stemmed glass decorated and rimmed with gold.

Throughout the meal Guidone was welcoming, considerate – and authoritative on matters of menu and cellar. The dessert wine was in honour of the celebration going on at our table.

More generally, the service at Open Door, particularly by the door staff and waiters, sometimes verges on stiff. In fairness, it seems likely that the staff will relax into their roles as the restaurant ages.