We’re sitting five storeys up in a glass box in the inner city. The kitchen and dining room are merged, there are potted bonsai and charcoal chopstick holders. A mobile of hanging wooden discs – reminiscent of Zen garden pebbles – is so huge it occupies the top half of the double volume space. This is globally-recognised chef Peter Tempelhoff’s new restaurant, Fyn. His intention here – it almost goes without saying – is to interpret the refinement of Japanese cuisine in a local context. 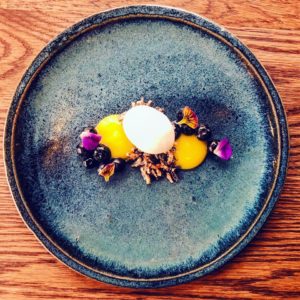 The blueberry dessert is genius.

Conceptualised and prepared by pastry chef Caroline Snyman, the dish neatly separates the tart, sweet and foresty flavours of the blueberry. The tartness is expressed in a zingy-yellow yuzu curd; the sweetness finds expression in a coconut ice cream, while puffed black rice coated in white chocolate provides a hint of bark.

It’s a knees-up celebration of the humble berry. As a concept it’s bang-on, but it wouldn’t work so well if Snyman‘s elements were not so exquisitely refined. The yuzu flavour – less aggressive but no less sour than lemon – retains its complexity. The ice cream is not too sugary: it’s hazily, creamily sweet. The black rice crunch balances the decadence of the white chocolate and earthiness of the rice.

Snyman‘s plating is beyond elegant: the dessert seems to hover above the azure glaze of the bowl. It’s a fittingly magical aesthetic.

Of all the dishes I ate at Fyn, this was the one that most successfully – most deliciously – married Japanese refinement and local flair.

Tempelhoff and his team have not set themselves an easy task. We had the set lunch menu, which comprised Bento canapés, a Kaiseki tray, a choice of mains and a choice of desserts. We declined the wine pairing.

A Bento box is essentially a beautiful Japanese lunchbox, but the Kaiseki tray explicity sets out to balance the best of local and seasonal ingredients. The balance must be achieved visually, as well as through taste and texture. Traditionally, the tray includes a soup, grilled meat, vegetables (cooked separately) and a rice or noodle dish. Kaiseki should encapsulate the season and artfully honour the guest.

The broth and calamari dish – billed as “ramen” – was disappointing. It lacked the confidence of an umami punch to the jaw – when ramen’s purpose for existence, surely, is umami-punching.

It’s a tricky one, isn’t it? Refinement doesn’t always mean holding back.

The ash butter and the springbok dish were similarly withholding. The chefs’ technical skills were clearly in evidence but the flavours came across as tentative.

Fyn’s website promises “discoveries” and that “boundaries are crossed”. At Fyn, boundaries are crossed in the established manner of food fusion. But how inspiring is it? The website continues: “South Africa’s wild freedom is tempered by the rigours of contemporary cuisine to create a restaurant at the edge … join us on a journey of flavour discovery.”

With the savouries, the “rigours of contemporary cuisine” were very much in evidence. Technically, the meal was almost faultless, but I felt that the balance was tipped in favour of rigour. I longed for more evidence of “wild freedom”.

By way of contrast, Snyman’s cherry leather – the wibbly crown on a cherry and cheesecake deconstruction – was brighter than a melted pane of stained glass. The taste was a concentration of sweet and sour. And it was chewy, like guava roll.

Her malva pudding and Madagascan chocolate dessert – a frumpy-sounding brown pudding served on a brown plate – sang and danced because of her nestling blobs of salted plum gel. Her quenelle of fennel ice cream – sitting like a perfect white egg on a forest floor – was the cool, smooth respite demanded by the rich sponge and the chocolate. 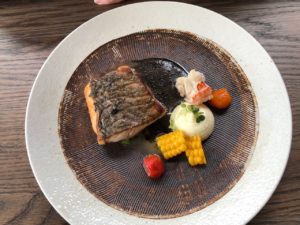 The low point of our Fyn lunch was the main course, the sea bass in particular. Although exquisitely cooked, the fish was served on a silt-black butter that dirtied the brilliant whites of the fish and langoustine. The plating was pedestrian, as was the use of mielie chunks and roasted rosa tomatoes.

The beef steak was beautifully cooked. The sides – mushroom ragout, Bok Choy two ways (steamed and crispy), and the sticky rice ball – were tasty but failed to elevate the meal beyond excellently-executed.

A meal at Fyn isn’t cheap. For the set lunch and two mocktails we payed R1400.

The service is excellent. The wine list is proudly, knowledgeably local.

Fyn has been open since November.