Michael Fridjhon: SA’s white blends are great but do they sell?

If you put a bunch of South African wine geeks in a room and leave them to talk about what’s on their collective mind, sometime quite soon, alongside discussion about the Swartland, natural ferments and the unsung heroes of the revolution, the issue of Cape white blends will get an airing. Typically there will be near unanimity about the quality of wines in this class, whether the more traditional sauvignon-semillon combos, or the chenin-Rhône compotes currently garnering a very positive press.

There’s not a lot of material here for controversy. The white Bordeaux blends have consistently out-performed the average medal count at the Old Mutual Trophy Wine Show. The last couple of Platter Five Star tastings have seen an equally splendid line-up of entries. When it comes to the less easily classified potpourris, lately there’s been greater refinement in how they have been put together. Wines which perhaps five years back were too fruity (and often too rich) to be completely convincing have suddenly come into their own, perhaps because they are now generally less chenin-dependent and now include a fair sprinkling of roussanne, grenache blanc and even that rarest of beasts, restrained viognier. 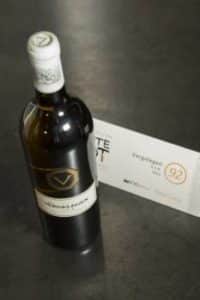 A quick survey among participants in that discussion will also show surprising consistency in the names of the top players. Vergelegen and Steenberg are the obvious candidates for the Bordeaux blends (and to which could now easily be added Morgenster, Highlands Road, Tokara and Delaire-Graff) with DeMorgenzon, Vondeling and Alheit owning the more chenin-styled space.

So far so good. General agreement around how impressive these wines are should translate into great sales. When Burgundy has a brilliant vintage – even when the economy is down – the punters are out there snapping up the tiny parcels of (often over-oaked, over-ripe) vinous collectables and driving prices up by as much as 40% year-on-year. The same does not appear to be the case when it comes to white blends from the Cape. Despite domination by South Africa of this class at the Six Nations Challenge, despite high ratings of the top wines by local and international commentators, despite high medal counts at credible wine shows, sales remain turgid.

Thirty years ago the explanation for this would have been simple enough: varietal names on the label were what sold wine. Meerlust Rubicon was the only exception, and that was because of a great word-of-mouth campaign. Until the law was changed to allow disclosure of the component parts of a blend, the assumption was that no news was bad news. If you didn’t say what went into the bottle, it was presumed you were too embarrassed to do so.

This shouldn’t be the case today. Information is readily available, and the show results alone should serve to give consumers the confidence to shop. Nor can the explanation be the apparent austerity of the white Bordeaux blend: if the combination of semillon and sauvignon blanc is a little too tart for some of the more sensitive palates, the Rhône-style blends (especially those with a fair dollop of chenin) should be making a killing.

Sadly the only credible explanation is the one we don’t want to admit to, but which was obvious from the outset: we don’t value white wine. There is so much easy drinking varietal wine about at under R50 that most consumers don’t really get why they should be paying any more. Of course there are the tiny production volumes of rockstar wines – which exist to create the illusion that there’s really a super-premium market out there. There are also the white wine equivalents of the over-priced reds, creations of the marketing department but not authentic measures of quality. Like the reds, they don’t really sell in a sustainable way.

The difference is that our white wines are closer to world class than our reds: our Chardonnays enjoy international recognition way in excess of their local price-positioning, and these white blends are pretty much in the same bracket. They over-deliver, the choice is extensive, but except for a handful of wines which sell because of their rarity, they come to market with a faint air of apology. South Africa’s best kept wine secret is the extraordinary value of our white blends, and we’re doing our best to keep things that way.

Get tickets to a tasting of top Sauvignon Blanc-Semillon blends in Cape Town here.