SA wine history: The forbidden fruit that was Roodeberg

Early last year I was commissioned by the KWV to research the history of Roodeberg ahead of the once-iconic brand’s 70th birthday. It was a fun project but also a fairly frustrating one because nobody at KWV headquarters in Paarl seemed able to find any of the old records.

For over half a century, of course, the wine itself had eluded most South Africans. In its heyday it accounted for one in every five bottles of wine exported, but locally it was virtually unobtainable, except by the lucky few who had a KWV quota (in exchange for supplying the giant co-operative with grapes or base wine). Oh, and those who believed Douglas Green’s St Augustine to be exactly the same red blend…

On account of its scarcity, Roodeberg acquired cult status. An article in the January 1986 issue of Wynboer magazine claimed: ‘For its lucky owner a bottle of Roodeberg can procure test tickets, biltong, the use of a beach cottage…name it!’ For South Africans abroad, the article said: ‘A glass of the precious liquid is like a hug from home.’

Roodeberg never pretended to be South Africa’s best red wine (a title generally agreed to have belonged to Alto Rouge) but it certainly became South Africa’s best-known wine, which is why the apparent lack of records was so frustrating, rather than adding to the brand’s mysterious allure.

Professor Charl Theron, who joined the KWV’s team of ‘wine scientists’ in 1970, was helpful, as was Niel van Staden, who later headed up KWV International’s marketing department. But I felt I’d finally struck gold (albeit just a small nugget) when KWV brand manager Carli Jordaan chanced upon the transcript of an interview with the founder of Roodeberg, Dr Charles Niehaus. 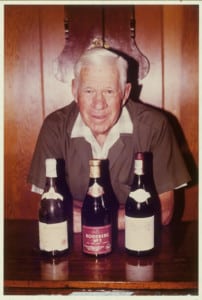 Appointed by the KWV in 1937 with the primary aim of making sherry, Niehaus took over as the KWV’s chief wine scientist in 1941 following the death of Dr Abraham Izak Perold, now famous for having invented Pinotage but then better known for his full-bodied ‘Paarl Burgundy’ (not made from Pinot Noir, not as you might expect, but rather from the dark-fleshed teinturier grape, Pontac).

‘At the beginning I just carried on with Pontac,’ recalled Niehaus. ‘Later I saw that Pontac has colour but doesn’t get any better with age as a table wine.’ (Some of his contemporaries had a different view, as we’ve already seen here.)

When good-quality Shiraz became more available (courtesy of Meerendal Estate in Durbanville), Niehaus decided that this variety rather than Pontac should be the key component of his full-bodied blend. ‘I was the man who introduced Shiraz. Koos Starke produced Shiraz at Meerendal and he basically laid the foundation for Roodeberg in the beginning. We bought every drop that he made. That was the turning point.’

Niehaus was then asked by the KWV directors to rename the two red wines. ‘Sitting at my desk, looking out to the Paarl Valley and reflecting on the past, I noticed an incredible sunset cast on the mountains, and from an instant of timeless beauty, Roodeberg was born.’

By all accounts the sight of the ‘red mountain’ had brought back personal memories of Rothenberg, the ‘First Growth’ vineyard near Geisenheim where he had studied. ‘The memory was somewhere at the back of my mind when I had to come up with names for our wines.’

Having deliberately decided to spell the name with two Os (to make it a distinctly South African brand name as opposed to the German place name), Niehaus was furious when he returned from a five-month marketing trip to South America, Canada and the West Indies in 1949, only to discover that the labels for the maiden 1946 vintage of Roodeberg had been printed with one O. The wines were named Rodeberg No 1 (sub-text: ligte, droë, rooi tafelwyn) and Rodeberg No 2 (sub-text: vol, droë, rooi tafelwyn).

‘Apparently a certain Professor Kempton at Stellenbosch University had told the directors I’d spelled the name wrong,’ said Niehaus. ‘I said I knew all along that one O was correct for the place name but our brand name needed two! I immediately gave the instruction that the name must be printed with two Os from now on.’

In the early 1950s, the KWV directors realised the numbers 1 and 2 might give the impression that one wine was superior to the other. ‘So we kept “Roodeberg” for the full-bodied wine and named the lighter wine “Cabernet”. That was a good decision, if I may say so,’ said Niehaus.

A bigger challenge was the fact that the KWV bought wine (not grapes) from the farmers. ‘And the wine farmers didn’t have winemaking knowledge like today. I wrote a whole pamphlet for them and I gave them a bottle of yeast with instructions. How to use it. How to make the wine. Later we stopped doing that but in the early days we literally wrote it out for them.’

Transporting and storing the base wines also proved problematic: ‘They were pumped in, pumped out, pumped over and then stored in warm vats in our warm climate…’

After travelling overseas in 1955 to learn about the latest innovations in table wine production, Niehaus returned with one request: a temperature-controlled storage cellar. Only four years later was his request finally granted; his new cellar was ready in time for the 1962 harvest, by which time he had appointed a new German winemaker, Willi Hacker. ‘He could only speak German when he came but he was a very good choice. That’s when we began to make good table wines.’

By 1971, when Niehaus retired, Roodeberg was exported to 26 countries. ‘It cost 35c a bottle,’ said Charl Theron. ‘It was quite expensive!’

According to Theron, working for the KWV was the highest honour for a winemaker. ‘It was very formal, very traditional. You went to work in a suit and tie! As a winemaker you were part of the management staff because the wine was still made by the primary producers under our supervision.’

When the wines were ready, they were brought back to the KWV storage cellar for maturation and blending. ‘That system only changed after our own red wine production cellar was built in the late 1990s. The blending was never done by one person but by a panel. The aim was to create a consistent wine from one vintage to the next, not to reflect vintage variation. Roodeberg was quite full-bodied but not in today’s sense because no small barrels were used, only large 12,000-14,000 litre stukvate.’

Interestingly, Niehaus felt compelled to come out of retirement in 1974 when his long-time Shiraz supplier, Kosie Starke of Meerendal, announced that he could no longer supply the KWV because he’d received a better offer from Distillers Corporation. Recalled Niehaus: ‘I took him for tea and said, let me tell you, when we started buying your wine, you knew nothing about winemaking, we taught you everything. He acknowledged this, said he always told people that he learnt to make wine from Dr Niehaus. We spoke nicely and he promised that he would stay with the KWV. But a little later he said, sorry, Distillers had come with an even better offer…’

For a while after that, the Roodeberg blend was mostly low-yield Cinsaut with varying amounts of Shiraz, Cabernet Sauvignon, Pinotage and Tinta Barocca, matured in large vats for three years. A low point was the 1977 vintage (a poor vintage across the board in the Cape), resulting in a very ‘lean’ wine according to the first (1980) edition of John Platter’s wine guide. But the 1978 Roodeberg was described as ‘bigger, heavier, more traditional’ in subsequent editions of the guide, and both the 1979 and 1980 vintages received 4 Star ratings: ‘Excellent harmony of fruit, body, alcohol and acidity. Smooth texture leaves impression of generous wine. Just under 13% alcohol.’

A lot has happened since then: economic sanctions, the end of Apartheid, the transformation of the KWV from regulatory body to wine producer, the introduction of smaller (300-litre) oak barrels, some Ruby Cabernet and Merlot added to the mix (replacing Cinsaut, not to mention Tinta Barocca), the upward creep of alcohol levels…

Suffice it to say that in 1998, Dave Hughes wrote in Wynboer about the way in which Roodeberg was being ‘steadily repositioned among KWV’s elite, higher-priced products’ even as he insisted that it remained ‘a fundamentally sound, honest, very drinkable and satisfying wine’…

By and large, that second part remains true, and it’s no mean feat considering current production of just under three million litres. As far as ‘elite, higher-priced products’ go, however, the KWV launched a new ‘premium’ Roodeberg wine some years ago, named entirely appropriately in honour of Dr Charles Niehaus.

Is it any good?

The Dr Charles Niehaus 2016 achieved a 89-point rating on this platform (see here) with Christian Eedes not entirely convinced by the blend of 38% Shiraz, 32% Cabernet Sauvignon, 20% Merlot and 10% Malbec, sourced from Stellenbosch, Paarl and Darling, and matured in 100% new oak barrels (85% French, 15% American) with 14.29% alcohol by volume.

Commenting on Christian’s review, Kwispedoor pondered: ‘How about losing the Bordeaux cultivars (apart from the cab) and getting stuff like cinsaut and tinta in there? Chuck the new wood and let the wine naturally stabilise for 2-3 years in old oak? Harvest certain of the cultivars a touch earlier?

‘In this case,’ wrote Kwispedoor (and I can’t help agreeing), ‘innovation might just partially require a journey back to the roots.’