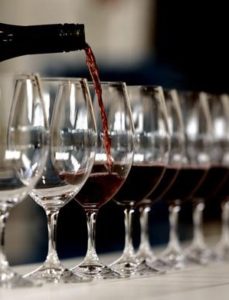 Seems to be wine competition season again – which I’m not involved in, beyond curmudgeonly comment from the sidelines – but also looming is the task of tasting for the 2016 Platter’s Guide, in which I am involved. That’s a rather different process, but sharing the tricky job of rating wines.

The 100-point system is increasingly widely used – even, last year, for the first time in Platter’s, hidden behind its well-established five-star grading. Of course, it’s really a 50-point system, often effectively a 20-point one (80-100, with rare dips below) or a 40-point one (60-100: Michael Fridjhon use scores in the 70s for the bronze-medal level, but that seems a rare interpretation). And Platter’s five stars cover ten points, given half-stars. The 20-point-system as most commonly used rather bizarrely compensates from dropping scores below ten by compensating with half-points.

Theoretically, I like the idea of a broad brush approach, like the uncompromised five-star system used by the great Michael Broadbent. Quibbling between, say, 91 and 92 points suggests an inappropriate claim to quasi-scientific discrimination. But it remains a theoretical ideal, and I confess to often agonising between, say, 4 stars and 4.5 stars when ranking a wine for Platter’s, and wishing for a rating in between: 4.25 stars! So I might even welcome the 100-point system coming out out of the Guide’s closet (and wouldn’t be surprised to see it happen).

Meanwhile, I continue to avoid scores altogether on Grape – an unfashionable procedure (it’s Angela Lloyd’s too), but the response I prefer.
My point is that I wonder if this frantic attempt to score wines is what most winelovers in need of advice in an overcrowded wine market really want. Surely what they need, importantly, and so it can be considered against the price, is to know if a wine is excellent, very good, fairly decent, not-so-good, or poor. For which a five-star system should work just fine.

Equally importantly, is to know the style of the wine. And here I think most descriptions connected to competitions (and probably Platter’s too) fail, tending to blur differences. It’s partly a lack of agreement on stylistic descriptors, perhaps: some people’s idea of “elegant” or “classically styled” is certainly not mine.

But knowing the type of wine is, for me, just as important as whether it is good or excellent. Take Spier’s recently released Frans K Smit 2009, which I sampled last week. This brilliantly accomplished wine should do extremely well in any competently judged competition. It’s velvety plush and rich, with loads of ripe fruit but a fairly dry finish; the oak supportive and suggestive but reserved; it’s well structured with every molecule of tannin polished and buffed. Everything is in balance, and essentially faultless, and in that sense worth all of the hefty R745 a bottle it costs. Yet, while a few sips gave me pleasure, it cost me no pang at all to leave the rest of the bottle untouched, when I turned to actually drink a smaller – even arguably “lesser” – wine, but one that had some “soul” to it, that had a less glittering surface, but more fundamental charm and character.

If I was wanting advice emerging from a tasting, including a competition, that’s what I’d want to know: if you (perfectly reasonably) like suave, polished and, above all, big and impressive wines – go for the Frans K Smit. On the other hand, if you’re a fan of, for example, scarcely-oaked cinsaut, spend your money elsewhere.

Maybe it’s not so much the competition judges that let winelovers down, but those who write the notes.